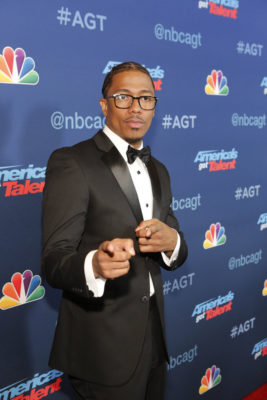 Nick Cannon’s talk show is on an indefinite pause. Deadline reports the comedian/host’s upcoming daytime TV show will not premiere this fall as previously announced.

The syndicated daytime talk show, titled Nick Cannon, is set to feature celebrity interviews and Cannon’s take on pop culture trends. The series was supposed to launch nation-wide this fall.

Cannon’s talk show has shut down production and will not debut later this year because of the comedian’s recent anti-semitic remarks. Cannon issued an apology and will continue hosting The Masked Singer on FOX, but ViacomCBS has cut ties with the comedian. Producers Lionsgate said they hope Cannon’s daytime talk show will debut next year. Read the full statement below:

The Nick Cannon Talk Show will not debut this year. After conversations with Nick, we do believe that his public comments don’t reflect his true feelings and his apology is heartfelt & sincere. We want to continue the healing process as he meets with leaders of the Jewish community and engages in a dialogue with our distribution partners to hear their views. We are standing by Nick in our hope that by fall 2021 he will be able to use his extraordinary talent and platform to entertain, enlighten & unite his audience on the Nick Cannon talk show.”

What do you think? Are you a fan of Nick Cannon? Will you watch his daytime talk show?

I really hope they ask Mel Robbins to keep her show in production, at least until they have his show airing (although I certainly won’t be watching his show either way).
IMO, Mel is the next Oprah to inspire and bring positively into our lives, and I’m really going to miss her amazing wisdom and guidance in this overwhelmingly negative county!

I won’t be watching it.And I have a feeling if it does air it won’t last long before NBC pulls the plug on it.

I used to really like Nick. I thought he was charming and funny. But it seems he has gone off the deep end over the last few years. He was fired from AGT for his remarks. This was the second chance. No more!!! Many people get fired for much less. His comment are insulting and just too much. BYE NICK!

I won’t watch anything he’s in now. So as much as I love The Mask Singer, I doubt I’ll be watching.

I am very disappointed in Nick Cannon. I will no longer watch masked singer or any other show he is affiliated with

Unfortunately for me I was a true fan and I’m extremely disappointed in Nick Canon. The fact that he had such horrific feelings about white and Jewish human being appalls me. Never again and he lost a fan.

The last thing anybody needs is another daytime talk show hosted by a nothing “celebrity”.

And that was BEFORE he was exposed as a raging antisemite.

He needs to never be on another show again. He is not a good person at all. Been calling for him to be let go from The Masked Singer. He is the worst part of that whole show.

John
Reply to  Cancel Him

I agree 100%. I was so glad when he left America’s Got Talent. The worst part of that show. He always tried to make it all about himself.

He is a piece of Trash..why should his remarks be a surprise..he does not deserve any show and should be blacklisted from television altogether!