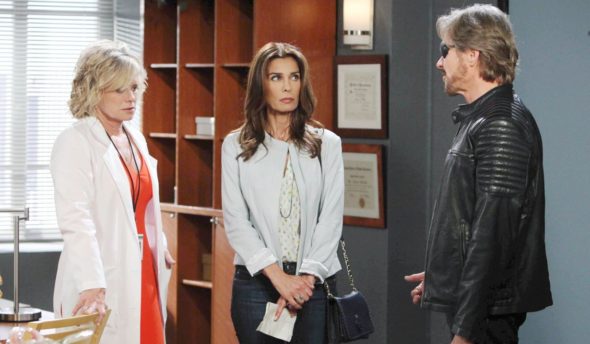 What’s next for Hope Williams Brady? Recently, Days of Our Lives star Kristian Alfonso spoke with Entertainment Tonight about her departure from the NBC soap.

So why did Kristian Alfonso leave Days of Our Lives after 37 years? Speaking to ET, Alfonso says producers were going to writer her character off the NBC soap for 4-5 months:

And at that moment I thought to myself, you know what, it’s time for a change, and it was the perfect moment to make that decision. I was taken aback when he said that they wanted, he and [co-EP] Albert [Alarr] wanted to take me off camera for four to five months. It was not something that had ever been discussed but that’s what it was… I just thought, you know what, it’s time to really write a new chapter. I’ve had an incredible run there.”

Alfonso has reportedly filmed her last episode. Though, the actress is uncertain how her character, Hope, will be written off:

In the storyline, I still have scripts that were supposed to be shot. Of course, everything is being probably rewritten because of COVID and guidelines that they have to adhere to. But that was not supposed to be the end.”

What do you think? Do you watch Days of Our Lives? Will you keep watching without Hope?

I will watch it as I have watched it forever but will miss Kristian Alfonso greatly. I haven’t liked the writers writing for her character lately but she’s awesome. Good luck to you!,,

I’ve watched Kristian Alfonso since she’s been on a Days of Our Lives & she’s a great actress. I love her character Hope Brady. I watch Days everyday. Best soap on TV. She will be missed. Days won’t be the same without her. I pray NBC never cancels Days of Our Lives. Love the characters! The writers have been great with the storylines. We wish you much luck Kristian Alfonso && hope they will bring you back to Days!

No I will not . Why would they do that to her she had been Amazing. Why not give her great love story like with Bo. The writers have failed the show. That’s who should be leaving

Yes I will continue to watch.

I will still watch it but I will miss her. I wish she would reconsider!

I’m going to miss Hope Brady. I have loved her since she first became Hope. I have watched DOOL for many years . I watched with my mother when I was a kid . I was hoping that eventually that Bo Brady ( Peter Reckell) would come back for another run . It would really be cool if Peter Reckell would come back and he and Hope could ride off in the sunset together like they should be . Well Bye Kristian Alfonso it was a pleasure watching you for the years that you were on DOOL ! It’s time… Read more »

No Hope should finish her story line.
I understand a mo or 2 off. But dont cut her

I still watch DOOL despite the actress who plays Hope Brady won’t be on the show after 37 years. I still hope and pray that the show won’t killed off Hope Brady. I just hope that she will be sailing into the happy ending

I have been a DOOL fanatic for 6 years. While I respect Kristian Alonzo’s work on the show, I am not a big fan of her character. It is whiny and pretentious. She seems to get too much boring airtime. I guess that is due to the history and longevity of her character. My prediction is they will not kill her off, just put her on hiatus. When she misses the show and cannot find work elsewhere, she will come crawling back. It will probably be in 4-6 months. Kristian will have had a vacation and show management will save… Read more »