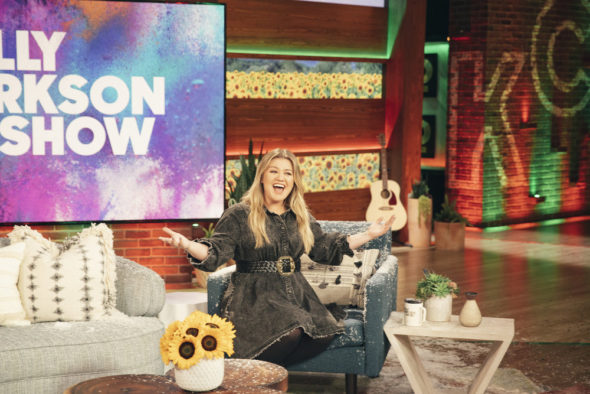 New syndicated talk shows can have a tough time getting established and many are cancelled after just a year or two. Currently airing its second season, The Kelly Clarkson Show appears to have bucked the trend and has already been renewed for seasons three and four, keeping the series on the air through the 2022-23 broadcast season.

According to NBCUniversal Syndication Studios, the two additional years have already been sold to stations in more than 75% of the country.

The program aired original episodes over the summer when most daytime series are airing repeats. After filming remotely from Montana and from Clarkson’s home in Los Angeles during part of the lockdown, the syndicated series returned to Universal Studios in Los Angeles to film season two in September.

Here are some additional details about the two-season renewal:

The hourlong daytime program, which currently airs in 100% of the country on more than 200 stations, has already been sold in national syndication to more than 75% of the U.S. for its third and fourth seasons. “The Kelly Clarkson Show” is produced and distributed by the recently renamed NBCUniversal Syndication Studios, which is currently expanding its portfolio.

“One ray of sunshine in this wildly unpredictable year is that we get to continue to deliver to stations and fans a show that brings people together,” Wilson said. “This wouldn’t be possible without the heart and humor of the talented and dedicated Kelly Clarkson and our production team, led by the incomparable Alex Duda, both of whom are masters of storytelling. It’s easy to see why Emmy voters, critics and viewers have become such loyal fans of the show.”

Said Valari Staab, President, NBCUniversal Owned Television Stations: “‘The Kelly Clarkson Show’ is one of the most optimistic success stories in first-run syndication. Kelly is a beloved performer and host with deep roots at NBC and we are delighted to have her continue to be a very important and treasured part of our stations’ programming.”

“The Kelly Clarkson Show” made an unprecedented move to stay in original episodes over the summer. They continued to film remotely from Montana and from Clarkson’s home in Los Angeles during part of the COVID-19 lockdown. The syndicated series returned to its home at the Universal Studios lot to film season two in September.

“The Kelly Clarkson Show” is hosted by Emmy Award-winning host and GrammyAward-winning artist Kelly Clarkson. The critically acclaimed daytime talk show headed into its second season as the most watched new talk show in seven years. Season two features in-studio guests and a virtual in-studio audience with fans from across the country.

In its first year on the air, “The Kelly Clarkson Show” received three Daytime Emmy wins, more than any other talk show in 2020. Clarkson was named Outstanding Entertainment Talk Show Host and the show also received a Critic’s Choice Award nomination. Showrunner and executive producer Alex Duda received a Gracie Award in 2020, which recognized “The Kelly Clarkson Show” as exemplary programming created by, for and about women.

Clarkson’s “weekday hang” includes a mix of celebrity guests and everyday people, performances, games and her unfiltered perspective on life, relationships, parenting, kids and things that make her laugh her along the way.

What do you think? Have you watched The Kelly Clarkson Show on your local station? Are you glad that it’s been given a two-season renewal? What time does it air in your market?

Love Love Love The Kelly Clarkson Show. Get her off the teleprompter. Kelly freestyling is where it’s at. The teleprompter stifles her hilarious sense of humor.

Such a great singer and actress wonderful news.