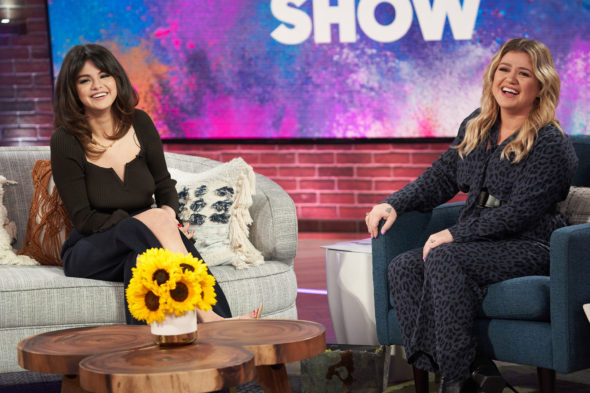 Despite the coronavirus threat, The Kelly Clarkson Show will continue airing new episodes throughout this spring. They will feature Clarkson from her home in Montana.

UNIVERSAL CITY, CA – April 6, 2020 – “The Kelly Clarkson Show” continues to keep the syndicated daytime talk train running with new original weekly episodes, all new “Messages from Montana” from host Kelly Clarkson, glimpses of life on her ranch, never-before seen in studio content plus new digital original exclusives. The new content will be included in episodes taped before the show paused production on March 13 for the safety and health of the production team due to growing concerns around the coronavirus.

Clarkson will continue to deliver “Messages from Montana” monologues from the Big Sky State, where she is currently sheltering. Audiences will get inside peeks at Kelly’s life on the ranch. Staying true to our show staples, Kelly will highlight a different Good Neighbor each day to show what everyday citizens are doing to embrace their roles as helpers during the pandemic. Starting today, “The Kelly Clarkson Show” will produce one remote episode per week from Montana. Kelly will conduct virtual interviews with celebrities and people in our communities doing their part during this challenging time. Audiences can also look forward to more “Bathroom Kellyoke” editions:

“The Kelly Clarkson Show” is the uplifting daytime destination for humor, heart and connection featuring singer/songwriter and America’s original idol, Kelly Clarkson. “The Kelly Clarkson Show” features the biggest names in film, television and music; as well as emerging new talent and community heroes. Her “weekday hang” includes live performances, games and Kelly’s unfiltered perspective on life, family, kids, relationships, marriage and things that make her laugh her along the way.

“The Kelly Clarkson Show” is produced and distributed by NBCUniversal Domestic Television Distribution with Alex Duda serving as executive producer and showrunner. Clarkson and Brandon Blackstock are also executive producers. The show is taped in front of a live studio audience on the Universal Studios lot in Universal City, CA.

What do you think? Do you watch The Kelly Clarkson Show? Who’s been your favorite guest so far?

Her show is way overrated total borefest, all the celebrities are dull, her singing sounds the same every song, and nothing is happening in her life that is interesting. Same thing for Tamron, and Hoda and Jenna; I’m more entertained by Lawrence Welk reruns!

I thought in the beginning her show wasn’t that interesting, but she really has interesting people and celebrities daily. She really connects with people because Kelly truly is a genuine person because she came from humbling background. She wasn’t born rich so she understands what it means to sacrifice to get to where you want. Plus she has a great sense of humor. I’d say you should give her another try.☺️