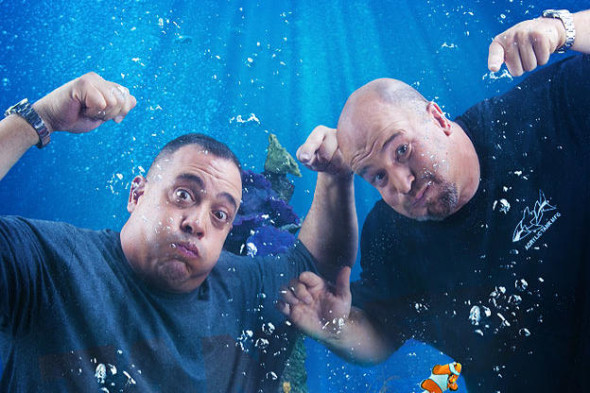 Tanked is coming back soon. Recently, Animal Planet announced the TV show will return for its 14th season later this month.

The new season of Tanked premieres on Animal Planet on March 30th at 9 p.m. ET/PT.

Wayde King and Brett Raymer of Animal Planet’s TANKED are two of Sin City’s most imaginative businessmen and owners of Acrylic Tank Manufacturing (ATM), one of the country’s most successful builders of elaborate aquariums. For years, the guys have been building awe-inspiring tanks and aquariums for celebrities and athletes, luxury hotels and casinos, Fortune 500 businesses and private homeowners. TANKED returns for a new season on Friday, March 30 at 9 PM ET/PT.

This season Wayde and Brett take on tanks for singer Keyshia Cole, comedian and television personality Howie Mandel as well as two-time light middleweight world champion, Fernando Vargas. The guys also jump at the chance to work at the iconic Mel’s Diner, Brett’s donut shop, Donut Mania, and the Mob Museum in Vegas!

A new addition to the TANKED family is, TANKED JR. A short-series in which 15-year-old, Abby Fedorowicz and her friends take you through a step by step process of how to build fin-tastic fish tanks! Each short is five minutes long and will air during the TANKED premieres and also be available on Animal Planet GO. They will feature unique themes such as a Safari Tank, a Carnival Tank and a Robot Tank. The results are fishy-fun tanks that will inspire viewers to design fish tanks of their own!

What do you think? Have you seen Tanked? Will you watch the new season?

I love the women on tanked, Agnes is so Hot

Need less of the women. Their shrill voices and cackling are a little too much to take; liked it better when they had less camera time. Also the shows have become too scripted and fake. Loved “Tanked” when it first came out. Still watch occasionally but used to watch all the time.