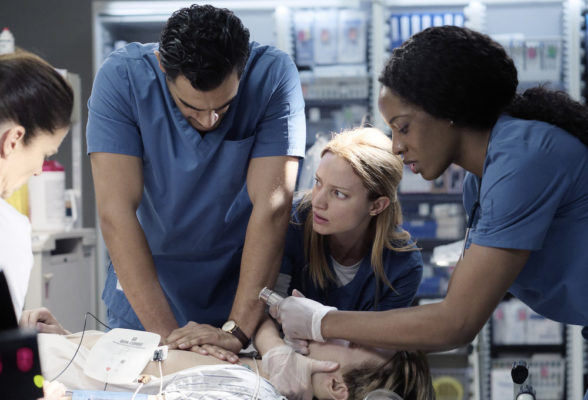 Can Bash meet the demands of his new job? Has the Transplant TV show been cancelled or renewed for a second season on NBC? The television vulture is watching all the latest cancellation and renewal news, so this page is the place to track the status of Transplant, season two. Bookmark it, or subscribe for the latest updates. Remember, the television vulture is watching your shows. Are you?

Airing on the NBC television network, the Transplant TV show stars Hamza Haq, Laurence Leboeuf, John Hannah, Jim Watson, Ayisha Issa, Linda E. Smith, and Torri Higginson. Doctor Bashir Hamed (Haq) is a charismatic Syrian doctor with battle-tested skills in emergency medicine. He and his younger sister, Amira (Gulamgaus), flee their war-torn homeland and become refugees, struggling to forge a new life in Canada. When a horrific truck crash nearly kills a senior doctor right in front of him, Bash saves the doctor’s life and earns a residency in the biggest Emergency Department of the best hospital in Toronto. Through it all, Bash tries to meet the demands of his new country and a new job, while trying to pay the bills, raise his little sister and carve out a new life for them both in this unfamiliar land.

The first season of Transplant averaged a 0.44 rating in the 18-49 demographic and 3.50 million viewers. Find out how Transplant stacks up against other NBC TV shows.

Will NBC cancel or renew Transplant for season two? This series originates on CTV in Canada where it’s already been renewed for a second season. I suspect that the peacock network will pick up the second season to air here in 2021. I’ll update this page with breaking developments. Subscribe for free alerts on Transplant cancellation or renewal news.

12/11/20 update: NBC has picked up the second season of the Transplant TV series.

What do you think? Are you glad that the Transplant TV show has been renewed for a second season? How would you feel if NBC had cancelled this TV series, instead?