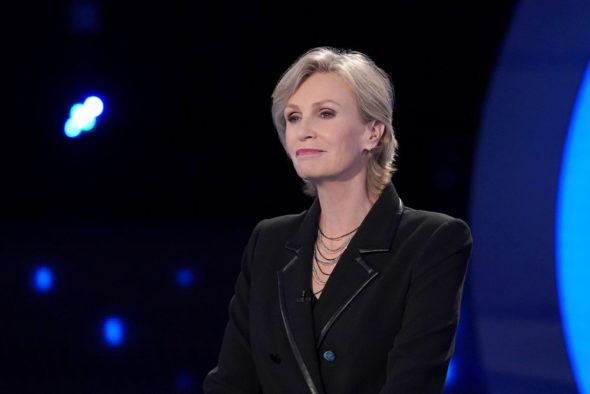 Is this show the “weakest link” when it comes to the ratings?  Has the Weakest Link TV show been cancelled or renewed for a second season on NBC? The television vulture is watching all the latest cancellation and renewal news, so this page is the place to track the status of Weakest Link, season two. Bookmark it, or subscribe for the latest updates. Remember, the television vulture is watching your shows. Are you?

Airing on the NBC television network, Weakest Link pits contestants against one another while also forcing them to work together in a trivia contest. This new version is hosted by Jane Lynch. In each episode, eight contestants enter the studio as total strangers but must work together to bank the maximum amount of prize money available in each round. At the end of each round, contestants vote to eliminate the fellow contestant they consider to be the “Weakest Link” in the chain. The contestant who receives the highest number of votes leaves the game as the host utters the iconic phrase, “You are the Weakest Link. Goodbye.” By the end of the episode, a single player can win up to $1,000,000.

The first season of Weakest Link averaged a 0.66 rating in the 18-49 demographic and 3.72 million viewers. Find out how Weakest Link stacks up against other NBC TV shows.

Will NBC cancel or renew Weakest Link for season two? This series had a successful run on NBC and in syndication and is relatively inexpensive to produce. The first episode did very well, thanks to the Presidential debate. I suspect that Weakest Link will be renewed. I’ll update this page with breaking developments. Subscribe for free alerts on Weakest Link cancellation or renewal news.

1/26/21 update: Weakest Link has been renewed for a second season on NBC.

What do you think? Are you glad the Weakest Link TV show has been renewed for a second season? How would you feel if NBC had cancelled this TV series, instead?

Weakest Link is by far the best show on tv. Please let it return.

Love the weakest link. Checking to see if it’s on Monday Dec 7,2020

Love Jane Lynch, please renew this show. My family adore her and love to answer the questions. So it’s educational !!!!

Loved the first episode…. she is ALWAYS a fun host!