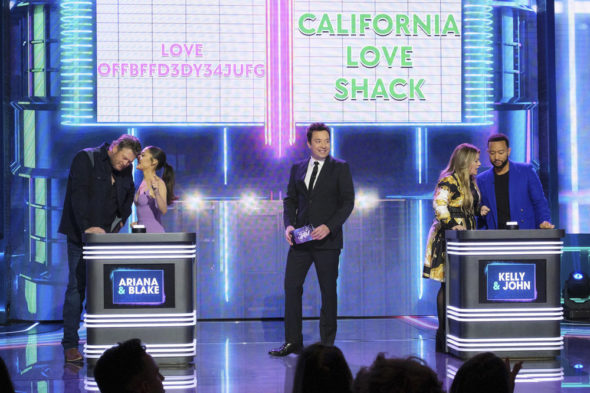 Is this game show a winner? Has the That’s My Jam TV show been cancelled or renewed for a second season on NBC? The television vulture is watching all the latest cancellation and renewal news, so this page is the place to track the status of That’s My Jam, season two. Bookmark it, or subscribe for the latest updates. Remember, the television vulture is watching your shows. Are you?

Airing on the NBC television network, the That’s My Jam TV series is hosted by Jimmy Fallon and is based on segments from The Tonight Show. Each episode of the feel-good series features two teams of two celebrities who are competing to benefit a charity of their choice. They take part in musical performances as well as dance, trivia, and music-based games. Signature segments of the show include Launch the Mic, Air Guitar, Don’t Drop the Beat, Perfect Mash-Up, Wheel of Impossible Karaoke, Slay It, Don’t Spray It, and many more.

The first season of That’s My Jam averages a 0.45 rating in the 18-49 demographic and 2.47 million viewers in the live+same day ratings (including DVR playback through 3:00 AM). While these numbers don’t include further delayed or streaming viewing, they are a very good indicator of how a show is performing, especially when compared to others on the same channel. There can be other economic factors involved in a show’s fate, but typically the higher-rated series are renewed and the lower-rated ones are cancelled. Find out how That’s My Jam stacks up against other NBC TV shows.

Will NBC cancel or renew That’s My Jam for season two? This show appears to be relatively inexpensive to produce and can help cross-promote The Tonight Show as well as other NBCUniversal projects. I think it’s got a good chance of being renewed. I’ll update this page with breaking developments. Subscribe for free alerts on That’s My Jam cancellation or renewal news.

What do you think? Are you glad that the That’s My Jam TV show has been renewed for a second season? How would you feel if NBC had cancelled this TV series, instead?

Very confusing/chaotic. Love Jimmy Fallon but he needs to be a host to keep things going, not being the center of attention. The outfits appear humiliating for the contestants! Wigs and goggles? Seriously!

The contestants made the show. The show seemed disorganized and the host did not appear to know what was going on. The host needs to be a host, not a contestant. May be a disaster with other contestants. Time will tell.

Funny, those were my exact thoughts. Very chaotic.