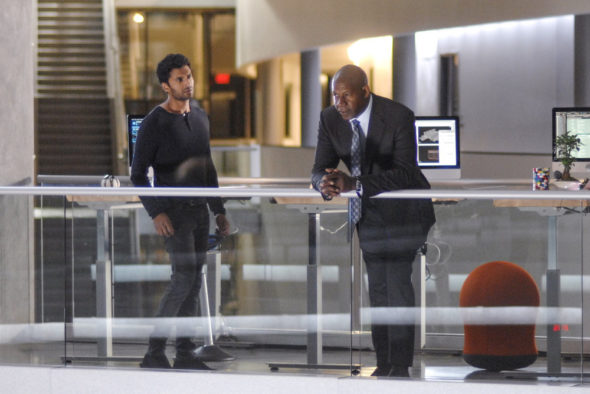 Has Mara Kint figured out how to save herself? Is the Reverie TV show cancelled or renewed for a second season on NBC? The television vulture is watching all the latest cancellation and renewal news, so this page is the place to track the status of Reverie season two. Bookmark it, or subscribe for the latest updates. Remember, the television vulture is watching your shows. Are you?

An NBC techno-thriller, Reverie stars Sarah Shahi, Dennis Haysbert, Sendhil Ramamurthy, Jessica Lu, Kathryn Morris, and John Fletcher. The drama centers on human behavior expert Mara Kint (Shahi), who retired from her career as a hostage negotiator, after a personal tragedy. Her old boss, Charlie Ventana (Haysbert), has now tapped Mara for a mission to save regular people who have essentially lost themselves in an immersive virtual-reality experience, which lets them live out their wildest fantasies and most dearly held dreams.

The first season of Reverie on NBC averaged a 0.44 rating in the 18-49 demographic and 2.10 million viewers. Find out how Reverie stacks up against other NBC TV shows.

Will NBC cancel or renew Reverie for season two? The ratings were terrible right out of the gate so I’m sure that this series will be cancelled. I’ll update this page with breaking developments. Subscribe for Reverie cancellation or renewal alerts.

What do you think? Were you hoping that the Reverie TV show would be renewed for season two? Are you sorry that NBC cancelled this TV series, instead?

I’m highly upset to find about a nother great show has been canceled and left us with a good cliffhanger. If you a**hole want to cancel a show fine don’t leave us with a cliffhanger. Have some consideration for the fans thank you D. Rojas III