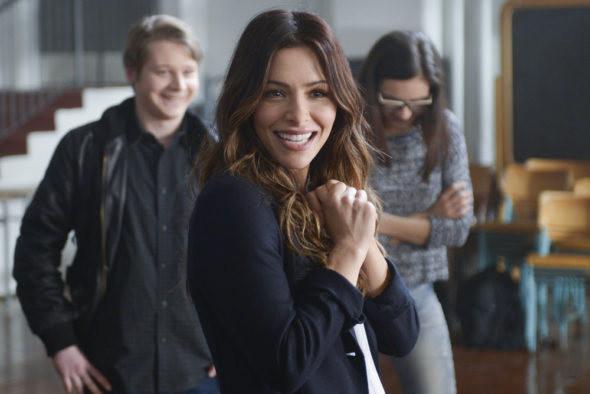 Are you enraptured with the first season of the Reverie TV show on NBC? As we all know, the Nielsen ratings typically play a big role in determining whether a TV show like Reverie is cancelled or renewed for season two. Unfortunately, most of us do not live in Nielsen households. Because many viewers feel frustration when their viewing habits and opinions aren’t considered, we’d like to offer you the chance to rate all of the Reverie season one episodes here.

An NBC high-tech thriller, Reverie stars Sarah Shahi, Dennis Haysbert, Sendhil Ramamurthy, Jessica Lu, Kathryn Morris, and John Fletcher. The drama centers on human behavior expert Mara Kint (Shahi), who retired from her career as a hostage negotiator, after a personal tragedy. Her old boss, Charlie Ventana (Haysbert), has now tapped Mara for a mission to save regular people who have essentially lost themselves in an immersive virtual-reality experience, which lets them live out their wildest fantasies and most dearly held dreams.

What do you think? Which season one episodes of the Reverie TV series do you rate as wonderful, terrible, or somewhere between? Should NBC cancel or renew Reverie for a second? Don’t forget to vote, and share your thoughts, below.

I just finish my marathon to the series and greatly disappointed knowing that there will be no more season. Hoping to consider your decision and make a sequel and devide if it’s really worth it.

This was one of the under promoted great shows abs dwfibatelt deswrves season 2. Bring it back!!

Reverie is my favorite new show! Please RENEW it.

This is a very interesting show! So nice to watch a show that’s not about doctors or crime investigators. Love the uniqueness! This show should not be cancelled.

Renew Reverie! We have to much Reality TV. This show is fun and interesting.

They should renew Reverie. I want to see the next season.

Please continue another season of Reverie. I have come to enjoy the scifi whodunit. I’m so tired of the shows I get interested in being cancelled like Reign, Shadowhunters, etc… Please don’t cancel this one.

Please renew Reverie!!! I Love this serie, it’s so different and I like it. I have see many fantasy series but I have bored now to see another series with superheroes vampires or something like this.

Please dont cancel this show!!! This is a program that I had actually looked forward to watching every week!like, come on it’s time for reverie! Oh, that would be horrible if they dont have a season 2!

Please renew Reverie! Although Mara’s basic mission remained the same, each episode was unique and also involved issues related to her personal life. There is action, mystery, drama, and often a good moral to the story. Both my husband and I enjoy watching it.

I agree, Heidi! It deals with complicated issues but they are resolved in a positive way. I highly recommend this show to all age groups. There aren’t many shows out there that can fill that niche.

A sweet show reminds me of Fantasy Island. But much better. Its so hard at times to find a good summer show this one is a great find. Thus one and The Brave and Taken would be a great summer line up how avout it NBC?