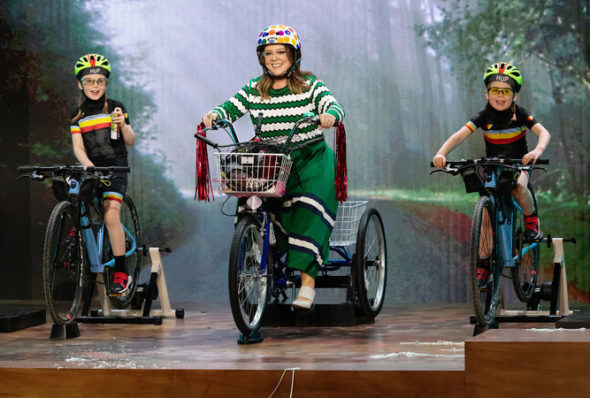 Is the new version of this show an improvement? Has the Little Big Shots TV show been cancelled or renewed for a fifth season on NBC? The television vulture is watching all the latest cancellation and renewal news, so this page is the place to track the status of Little Big Shots, season five. Bookmark it, or subscribe for the latest updates. Remember, the television vulture is watching your shows. Are you?

Airing on the NBC television network, Little Big Shots features comedian Melissa McCarthy as the series’ new host. The show has been reimagined for season four and McCarthy meets with inspiring and hilarious kids from all corners of the globe. They take viewers into their world, share their remarkable stories and show viewers the incredible talents that set them apart. These are kids who defy the odds, reject stereotypes, and conquer their dreams. They may be small but their hearts are big.

Will NBC cancel or renew Little Big Shots for season five? The show was initially a big success for NBC but viewer interest waned after a couple of seasons. Now, it’s back with a new host and a tweaked format. I suspect the show is relatively inexpensive to produce but the ratings have gone quite low. I’m thinking that it will be cancelled. I’ll update this page with breaking developments. Subscribe for free alerts on Little Big Shots cancellation or renewal news.

Status update: The last episode of Little Big Shots aired in May 2020 so the show is assumed to have been cancelled by NBC.

What do you think? Were you hoping that the Little Big Shots TV show would be renewed for a fifth season? Are you sorry that NBC cancelled this TV series, instead?

Please bring Steve Harvey back as the Host of Little Big Shots . He was the best host you had and he loves those kids that were on the show. I watch the re-runs all the time. The world misses him on that show and so do I.

The Executives, Producers, or whomever it was, pooped in their Wheaties, when they let Steve Harvey go. There is NO ONE that could EVER Host this show as well as Harvey did! I hope you, whoever you are, lost millions of dollars on THAT decision. If Steve Harvey was still there, the show would still be going strong; DUMBA$$E$ !

Omg this can not be canceled!! I’m trying to put my grandbaby on here…You would be shocked at the conversation of a 3 year old. I hope they bring the show back. A million for a few of her videos on tic tok and she has a YouTube channel as well!!

LBS sucks since host Melissa McCarthy took over. Steve Harvey was a natural. MM appears to “overplay” her part. Bring back Steve Harvey if you want to save the show.

Sorry, this show is a BIG LOSER!