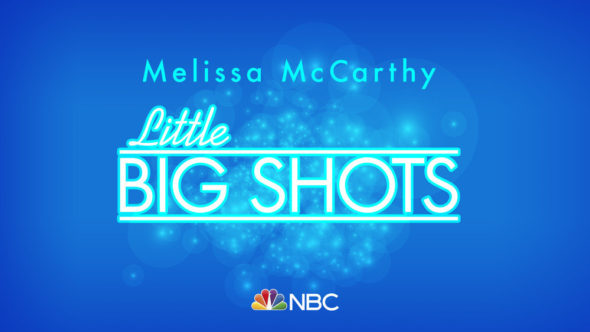 NBC has announced that the Little Big Shots TV show has been renewed for a fourth season but Steve Harvey won’t be returning to host the program. He’s being replaced by comedienne Melissa McCarthy. It’s unclear why the change is being made but the announcement comes on the heels of the news that Harvey’s daytime talk show, Steve, has been cancelled.

A children’s talent show, the first three seasons of Little Big Shots featured Harvey having light-hearted chats with gifted little ones, who exhibit a wide range of talents. Season three acts included a soap bubble artist, pint-sized aerialists, a golf prodigy, and the world’s strongest kid. Also featured are young experts in astronomy, mathematics, and archaeology. There are also musically gifted children, performing everything from pop to opera and country to classical, and on instruments that include the ukulele, drums, piano, more.

The series was once a big success in the ratings for the peacock network but those numbers diminished quite a bit over the three seasons. The third season of Little Big Shots averaged a 0.82 rating in the 18-49 demographic and 6.05 million viewers. Compared to season two, that’s down by 41% and 30%, respectively. Season three finished airing in December.

Season four of Little Big Shots is expected to air as part of the 2019-20 season. It’s not on the fall schedule.

There’s been no official word on the fate of the senior citizen version of the series, Little Big Shots: Forever Young, but it’s presumed to have been cancelled. The last episode aired in July 2017.

What do you think? Do you like the Big Little Shots TV show on NBC? Will you be watching the fourth season with a new host?

I feel the children really liked being on the show with Steve Harvey. I enjoyed his interaction with them. No I won’t be watching the fourth season or any other season. Good luck to the new host. May you continue with the show for the sake of the children. Just my preference.

I find the children too rehearsed and not natural in their conversations.

I was tired of Steve and thought he may have had questionable behavior dealing with the children.

We will give it a try but will miss Steve Harvey.

No I wont be watching this either. I dont watch Kelly Clarkson show anymore. I tried because I think she is a great singer, but show was not as entertaining as Steve show.

I liked the show and will watch the new version. Losing Steve might be a mistake: he was really good with the kids.

NBC IS CRAZY FOR TAKING STEVE HARVEY OFF THE SHOW I WILL NOT WATCH IT ANY LONGER.

The kids were talented no doubt but in the interviews on the couch they were mostly obnoxious ‘Little show offs’.

Melissa Mccarthy should be a good host of season 4, Steve Harvey spent more time talking than I wanted

Will not watch without Steve Harvey. Like Milessa but she can’t hold a candle to Steve. NBC has no idea what they are doing

Replacing Steve Harvey as the host of Little Big Shots is a HUGE mistake. His interaction with the kids and the audience is what makes the show so enjoyable and uplifting to watch.

Not without Harvey. Can’t see MM taking his place.

Will not watch. Steve was the Greatest on Little Big Shots and Steve Harvey’s talk show. Also will not watch Kelly Clarkson’s. Too talkative.

My 7 year old grandson said when he grows up he wants to introduce Steve off camera. ” Now here is Steveee Harvey!!!

I Love the show, although Steve Harvey made it! I will definitely watch, really like it and I like Melissa McCarthy also…..

Really steve Harvey was the greatest with the children. I would schedule my time watching this with my husband.