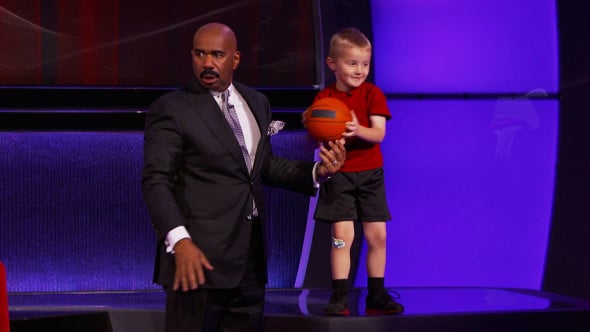 NBC has ordered a second season of their newest TV show, Little Big Shots. The season two order comes after the network aired just a pair of episodes with positive ratings.

Executive Produced by Ellen DeGeneres and Steve Harvey, Midseason Series Comes Out of the Gate on Fire With Huge Ratings, Including Best Ever L+3 for Alternative Series Premiere

Based on the incredible success over its first two episodes, NBC has renewed alternative hit “Little Big Shots” for a second season. The series comes from executive producers Ellen DeGeneres and Steve Harvey, who also hosts.

“I’ve been amazed at how smart and talented these kids are,” said Harvey. “They may be small in stature, but they’re giants in what they’re able to do.”

“I am so excited there’s going to be a second season of ‘Little Big Shots,’” said DeGeneres. “It’s such a great family show, and when it’s over you won’t have to explain what happens in the ‘fantasy suite.’”

Said Paul Telegdy, President of Alternative and Late Night Programming, NBC Entertainment: “Congrats to both Steve and Ellen for bringing these adorable kids to our attention and watching them flourish. We couldn’t be more excited about ordering a second season and having a national audience admire the remarkable feats of these exceptional children.”

Mike Darnell, President, Warner Bros. Unscripted and Alternative Television, said: “‘Little Big Shots’ is that rare show that starts out as a good idea and then, somewhere along the way, turns into a bit of magic. The incredible combination of Steve Harvey, Ellen DeGeneres and amazing kids is irresistible — fun, funny, and insanely family-friendly. I am incredibly proud of this production, and it’s nice to see that the right alternative concept at the right time can still attract a huge audience.”

The Tuesday, March 8 preview of “Little Big Shots” averaged a 2.9 rating 10 share in adults 18-49 and 12.8 million viewers overall, making it the highest-rated alternative series premiere or preview on any network in 18-49 since Fox’s “The X-Factor” in September 2011.

The March 8 preview also generated the largest L+3 total-viewer lift for an alternative series premiere ever, growing by more than 1.8 million persons, from 12.8 million viewers in L+SD ratings to 14.7 million in L+3.

“Little Big Shots” showcases young performers, from musicians, singers and dancers to every form of wunderkind from around the globe. These gifted kids awe the nation with their talents, slay us with their cuteness and wow us with their accomplishments. They show us once and for all that talent is born, not made.

What do you think? Do you like the Little Big Shots TV show on NBC? Are you glad that it’s been renewed or, do you think it should have been cancelled instead?

This is one of the best shows on TV. And WHAT an inspiration to our young population!

One of the VERY best shows ever! I’ve been trying to find out where I can see the show now. HELP!!!

PLEASE do not cancel this show. It’s the most delightful show to air in ages. We hope to see many more seasons . ” Kids say the darndest things!”

Excited to hear that Season 2 Little Big Shots was renewed. The kids are so funny to watch. This is a funny show that the whole family would love watching together.

One of the most entertaining shows ever. Steve reminds of Art Linkletter with the kids – back in the day. But adds extraordinary talent. My wife and I both commented that Sunday night used to have at least one show the whole family could watch together. This is a keeper for long time. Steve is the perfect choice for being able to engage the kids. So very entertaining. We will look forward to the new season. As good as Steve is on iis other shows, thismmy onone is most remembered for. Not surprised that Ellen is co producer. Great combination.

Love the show LITTLE BIG SHOTS. I’m hoping it is NOT canceled. It’s amazing how much talent the little ones have. Finally a wholesome family program to watch with your children, and grandchildren. So hoping there will be a second season.

Best show on television. Cannot believe they would even consider taking it off.

LOVE THE SHOW – PLEASE KEEP IT ON!

LOVE THE SHOW! KEEP IT ON – ONE OF THE FEW SHOWS ON TV FIT TO WATCH!

Little Big Shots is the greatest show I have seen in some time. The little kids are talented, polite, etc. goodie for them and their parents.

This is a great show! We love watching it. Great job NBC!!!