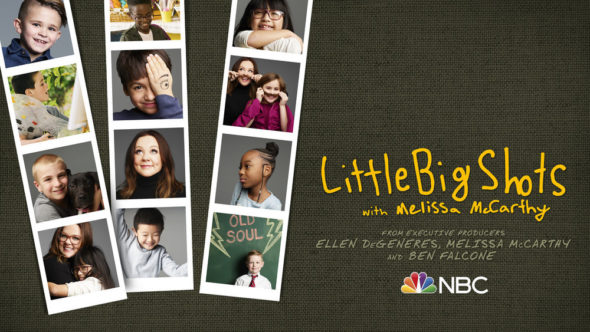 NBC has announced the returns of three of the peacock network’s unscripted shows — Little Big Shots, The Wall, and Songland.

Season four of Little Big Shots will kick off on Sunday, March 1st, at 7:00 PM. Melissa McCarthy replaces Steve Harvey has the show’s host (though Harvey remains one of the series’ executive producers).

Hosted by Chris Hardwicke, the third season of The Wall launches on Sunday, March 15th, at 7 PM. Last word is that the network has ordered 20 episodes. The second season wrapped in February 2018.

Meanwhile, the second season of Songland debuts on Monday, April 13th, at 10 PM. There will be 10 episodes. The first season of 11 episodes finished airing last September.

“Little Big Shots” premieres Sunday, March 1 at 8 p.m. ET/PT, with a special preview on Monday, Feb. 24 at 10 p.m. immediately following the season premiere of “The Voice.” (A repeat of the first episode will air Sunday, March 1 at 7 p.m.)

In a completely reimagined new season, McCarthy meets with some of the most inspiring and hilarious kids from all corners of the globe. They will take us into their world, share their remarkable stories and show us the incredible talents that set them apart. It’s a celebration of how resilient, funny and inspiring kids can be when we allow them to be unabashedly themselves. They may be little, but their hearts are big.

The series is produced by Warner Horizon Unscripted Television in association with East 112th Street Productions, A Very Good Production and On the Day Productions.

“The Wall,” with Chris Hardwick returning as host, has changed people’s lives, giving away more than $11 million to date. This season executive producer LeBron James has a game-changing twist to give away record-breaking money. Get ready for the all-new Superdrop, when all seven balls rain down in a waterfall drop that takes the total possible prize each night to over $13 million. But with more reward, comes more risk and the potential to lose it all. Every question and every decision could be the difference of millions of dollars in what is truly the most unpredictable show on television.
During the 2017-18 season, “The Wall” averaged a 1.2 rating in adults 18-49 and 6.0 million viewers overall in “live plus seven day” Nielsens, for growth versus the show’s next-day “live plus same day” results of +20% or +1.0 million persons in total viewers. “The Wall’s” 2017-18 finale on Feb. 5, 2018 hit season highs to deliver the show’s most-watched episode in more than a year, and has grown with delayed viewing since that telecast to a 1.72 rating in adults 18-49 and 7.4 million viewers overall.

“The Wall” is a collaboration between SpringHill Entertainment and Glassman Media with James, Hardwick, Maverick Carter and Andrew Glassman serving as executive producers. “The Wall” was developed by Glassman Media in conjunction with CORE Media and produced in association with Universal Television Alternative Studio.

SONGLAND
NBC’s groundbreaking series “Songland” is back for a second season beginning on Monday, April 13 at 10 p.m. ET/PT.

The 10-episode series is an authentic peek into the creative process of songwriting and provides undiscovered songwriters the chance to pitch their original creations to top recording artists and a panel of the most sought-after producers in music – Ester Dean (Grammy-nominated songwriter and producer of Rihanna, Katy Perry, Nicki Minaj), Shane McAnally (three-time Grammy-winning songwriter and producer of Kacey Musgraves, Kelly Clarkson and Sam Hunt with over 40 #1 country records and two-time ACM Songwriter of the Year) and Ryan Tedder (lead singer of OneRepublic and four-time Grammy Award-winning songwriter and producer of Adele, Taylor Swift, Beyoncé and Jonas Brothers) – in the hopes of creating the recording artists’ next big hit songs.

Season 1 of “Songland” produced multiple chart-topping hits including seven songs that achieved a #1 ranking on an iTunes music chart.

What do you think? Have you seen Little Big Shots, The Wall, or Songland on NBC? Will you be tuning in for their returns?

WHERE IS Steve Harvey? He was the Best. I will no watch

THANK YOU FOR THE UPDATE