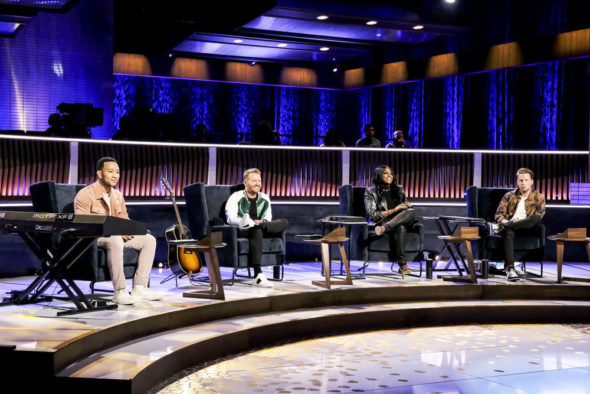 TV show description:
From executive producers Audrey Morrissey, Ivan Dudynsky, Dave Stewart, Chad Hines, and Adam Levine, the Songland TV show puts a new spin on the old standards, The Voice and American Idol. Instead of unknown singers and musicians hoping for a shot at fame and fortune, on Songland, the musical superstars appear in order to find a new song to record, from an unknown writer.

In each episode, four songwriters perform their original tracks before successful musical producers Ester Dean, Ryan Tedder, and Shane McAnally, and the guest recording artist of the week. The panel assesses the lyrics, arrangement, rhythm, melody, and message and discusses ways to adapt the songs to fit the style, taste, and ability of the guest artist.

After the original performances, the artist selects three songwriters to move to the next phase, and pair each one with the producer best suited to the writer’s type of music. In the studio, the producer and songwriter will then work to custom the song for the guest artist. By episode’s end, the artist will select a song to record for a global release.

Series Finale:
Episode #21 — Usher
Multiplatinum, eight-time Grammy and American Music Award-winning R&B icon Usher, comes to the show to hear unknown songwriters pitch their original material. Three of the most successful and sought-after writer-producers in music, Ryan Tedder, Ester Dean and Shane McAnally, produce the songwriters to creatively adapt their songs to perfectly fit the superstar artist. One song is chosen to be recorded by the guest recording artist and released for a global audience.


What do you think? Do you like Songland TV series? Should this NBC TV show have been cancelled or renewed for a third season?

My 2 sons and I loved watching this show together! It even inspired my teens to learn guitar and start writing songs together. The judges are amazing! The show is amazing! Please make more episodes!

Love the Voice and love Songland

Please do not cancel SONGLAND, I LOVE THE SHOW! HONESTLY THERE HASN’T BEEN n episode where I didn’t tear up, because the songs and songwriters but mostly the genius of the panel in being able to collaborate with the writer to really generate a hit song. Please give this show a chance. A lot of people haven’t heard of it and with a little time it could be on people’s viewing habit list.

Amazing! And fun to later hear the selected songs on the radio or commercials (Jeep)

Best music show on the tube!