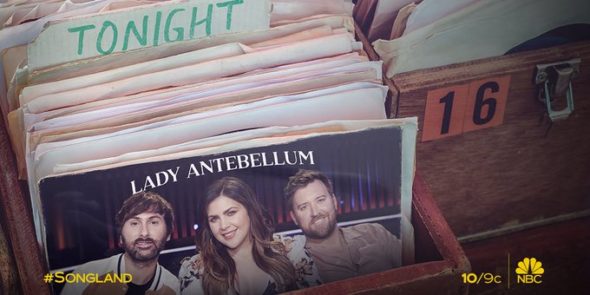 Will chart-topping hits be made in the second season of the Songland TV show on NBC? As we all know, the Nielsen ratings typically play a big role in determining whether a TV show like Songland is cancelled or renewed for season three. Unfortunately, most of us do not live in Nielsen households. Because many viewers feel frustration when their viewing habits and opinions aren’t considered, we invite you to rate all of the second season episodes of Songland here.

An NBC talent competition, Songland features successful singers looking for unknown songwriters to pen their next hit. In each episode, songwriters perform their original tracks before successful musical producers Ester Dean, Ryan Tedder, and Shane McAnally, and the guest artist of the week. The artist then narrows the field to three writers, each of whom works with one of the producers to arrange their song to serve the artist. By episode’s end, the artist selects a song to record for a global release. In the second season, guest artists include Boyz II Men, Florida Georgia Line, Luis Fonsi, H.E.R., Lady Antebellum, Martina McBride, Julia Michaels, Ben Platt, Bebe Rexha and Usher.

What do you think? Which season two episodes of the Songland TV series do you rate as wonderful, terrible, or somewhere between? Do you think that Songland should be cancelled or renewed for a third season on NBC? Don’t forget to vote, and share your thoughts, below.

Love this show! One of my favorites!!!

Please please bring back Songland !
This was a very good family show me and my granddaughter lived to watch it together as well as other family members. So please bring another season

Songland is a great tv show showing how the artist starts and looks for in a song. It’s awsy from the nasty tv programs. My 6 ,kids are ages 51 to 34 and 14 grand are from 32 to 4 and love music and dancing. Keep it on!

Songland is the best!

Please renewed another season more it so good. Waiting all summer need to continue love it.

“Songland” is the best reality show on television! I love the show. The concept is so amazing! The best part of the show is watching the evolution of already creative musical works and adding more creative input (via production) to really enhance the musical compositions. It is so interesting to view the process of creative songwriting, and watch the songwriters work with the very talented producers Ryan, Ester and Shane. I like that the viewing audience can try and guess which produced song will be picked; and we also get more insights of the guest recording artists. There has been… Read more »

Song land is a fantastic show !!! I can’t wait for it to come back

It is one of the best shows on TV. It is live, real and so interesting. Shane , Ester and Ryan are so entertaining warm and really work with the writers, it is amazing to see the process. In addition you hear really great music, get to see the personal side of talented recording artists. I look forward to it every week. Please renew it

In addition I watch a lot of and I would love to be a regular TV reviewer.

I agree totally. It covers the part of music most of us never get to see or hear. I love that show. The talent of Ryan, Ester and Shane and their guests is tremendous. I so want it on all the time.