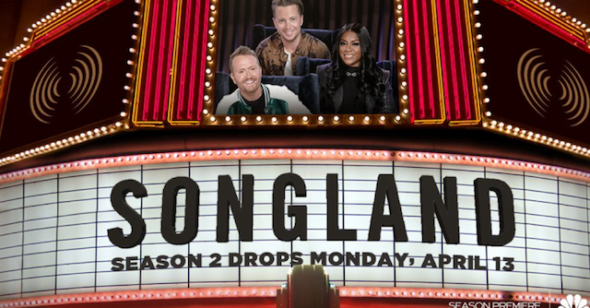 The Voice continues to be one of NBC’s top-rated series but the peacock network has had a tough time finding a hit to follow it on Monday nights. Last season, Songland did well enough to be renewed. Will the numbers rise or fall in year two? Will Songland be cancelled or renewed for season three? Stay tuned.

A talent competition, Songland features successful singers looking for unknown songwriters to pen their next hit. In each episode, songwriters perform their original tracks before successful musical producers Ester Dean, Ryan Tedder, and Shane McAnally, and the guest artist of the week. The artist then narrows the field to three writers, each of whom works with one of the producers to arrange their song to serve the artist. By episode’s end, the artist selects a song to record for a global release. In the second season, guest artists include Boyz II Men, Florida Georgia Line, Luis Fonsi, H.E.R., Lady Antebellum, Martina McBride, Julia Michaels, Ben Platt, Bebe Rexha and Usher.

6/16 update: You can see the latest night’s ratings in context.

For comparisons: Season one of Songland on NBC averaged a 0.83 rating in the 18-49 demographic and 4.01 million viewers.

What do you think? Do you like the Songland TV series on NBC? Should it be cancelled or renewed for a third season?

I love this show! The chemistry between the 3 is great….. I downloaded several of the songs. This gives a chance for new talent. It’s amazing to watch from the beginning how a song is created and all comes together!

Please renew Songland. It is amazing to see how a persons own written song can be transformed into a great song with the 3 pros help. I like there vibe together as a team and side bar I love the guy from One Republic … wink wink
Another thing there are just to many shows looking for singers and the real deal is “Writing A Good Song”

Please renewed another season. I know late show after the voice get more people to watch it both. I can’t believe not doing live shows so annoying ugh why are doing this to us.