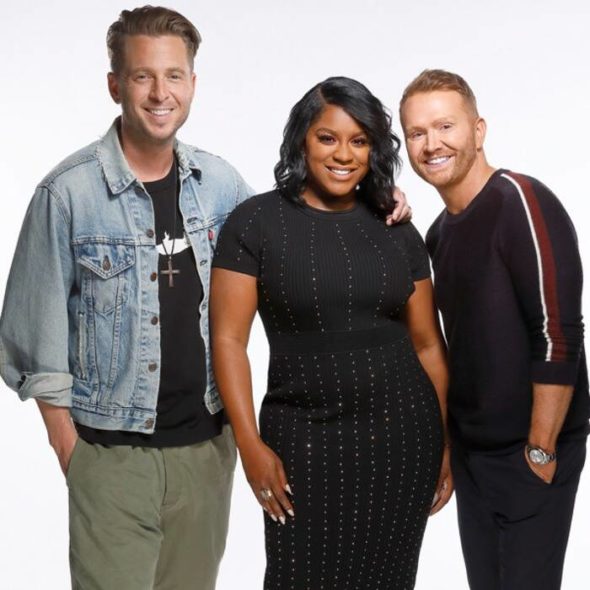 Will there be an encore? Has the Songland TV show been cancelled or renewed for a second season on NBC? The television vulture is watching all the latest cancellation and renewal news, so this page is the place to track the status of Songland season two. Bookmark it, or subscribe for the latest updates. Remember, the television vulture is watching your shows. Are you?

An NBC talent competition, Songland features successful singers looking for unknown songwriters to pen their next hit. In each episode, four songwriters perform their original tracks before successful musical producers Ester Dean, Ryan Tedder, and Shane McAnally, and the guest artist of the week. The artist then narrows the field to three writers, each of whom works with one of the producers to arrange their song to serve the artist. By episode’s end, the artist selects a song to record for a global release. In the first season, guest artists include Jonas Brothers, John Legend, Charlie Puth, Meghan Trainor, will.i.am, OneRepublic, Kelsea Ballerini, Macklemore, Aloe Blacc, Old Dominion, and Leona Lewis.

The first season of Songland averaged a 0.83 rating in the 18-49 demographic and 4.01 million viewers. Find out how Songland stacks up against other NBC TV shows.

Will NBC cancel or renew Songland for season two? The series doesn’t do nearly as well as its lead-in but, it’s still doing well so I think it will be renewed. It’s not a good sign however that NBC put the show on hiatus for over a month. For now, I’ll keep a hungry eye on the ratings and update this page with breaking developments. Subscribe for Songland cancellation or renewal alerts.

What do you think? Are you glad that the Songland TV series has been renewed for a second season? How would you feel if NBC had cancelled this TV show, instead?

Songland is the best out of all the singing shows ever, I watched all the season episode’s I love it and would like so see more, thank you Ester, Shane & Ryan

I totally agree-will it be coming back again for season 2. It is by far the best.

Super underrated show. Some of the best songs I’ve heard all year I heard through that show. Glad to see it coming back.

I love the concept, the format the wannabe songwriters …… EVERYTHING!! I look forward to seeing it every week and really hope NBC brings it back! Or maybe it gets picked up by another network. As long as it stays on I’ll be very happy

My hubby and I both LOVE Songland! It’s such a great show in showcasing a somewhat behind the scenes way of how songwriters connect with singers, as well as the process of tailoring a song by the mentors with the writers to a specific singer. We will be SO disappointed if this show didn’t come back!

I look forward for songland. I will be very disappointed if they cancel songland.

Fantastic show. Love the process and the end result.

Songland is unique…. demonstrating well the art of composing, mentoring, and editing. The producers are gifted at finding and developing new talent. My family watches each week.

Too complex. This show will fail. People like sausage, but don’t want to see it made.

The stars are a draw, as well as seeing how a song is produced. But, I think there is so much to cover in a one hour show that it is diluted and boring.