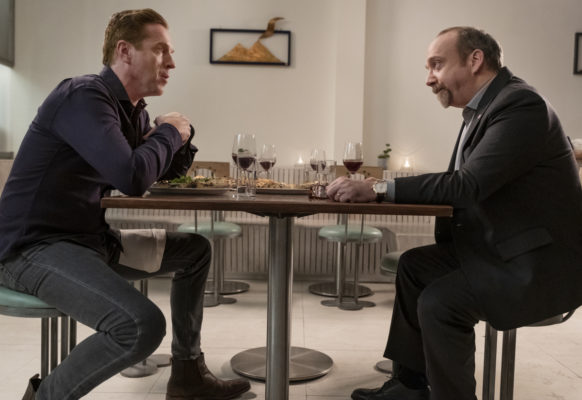 What’s next for Chuck and Axe? Has the Billions TV show been cancelled or renewed for a fifth season on Showtime? The television vulture is watching all the latest cancellation and renewal news, so this page is the place to track the status of Billions, season five. Bookmark it, or subscribe for the latest updates. Remember, the television vulture is watching your shows. Are you?

In Billions, season four, Chuck, Bobby, and Wendy have formed an uneasy alliance, in order to wipe out their rivals. Meanwhile, the cost of brazen ambition and betrayal is becoming more clear. Showtime says, “When everyone is out for revenge, no one is safe.”

The fourth season of Billions averaged a 0.16 rating in the 18-49 demographic and 772,000 viewers. Compared to season three, that’s down by 30% and 12%, respectively. Learn how Billions stacks up against the other Showtime TV shows.

Will Showtime cancel or renew Billions for season five? The series remains one of the channel’s most popular shows so, despite declining ratings, I don’t see it being cancelled this time around. For now, I’ll keep an eye on the Nielsens and update this page with breaking developments. Subscribe for free Billions cancellation and renewal alerts.

5/8/19 update: Showtime has renewed Billions for a fifth season.

What do you think? Are you glad that the Billions TV show has been renewed for a fifth season? How would you feel if Showtime had cancelled this TV series, instead?

Billions it’s simply outstanding , Excellent. That is the only reason I renewed my subscription with showtime. How ever the cast from Billions it’s amazing.

Totally agree. Billions is one of the best written and acted shows on TV. Hopefully there will be a Season 5!