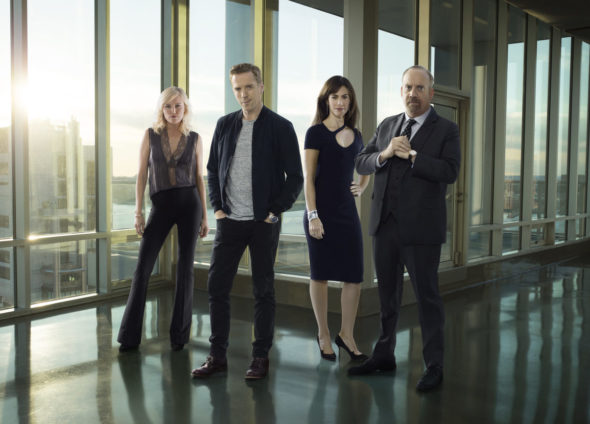 Whats up with Chuck and Axe? Has the Billions TV show been cancelled or renewed for a fourth season on Showtime? The television vulture is watching all the latest cancellation and renewal news, so this page is the place to track the status of Billions, season four. Bookmark it, or subscribe for the latest updates. Remember, the television vulture is watching your shows. Are you?

In Billions, season three, Chuck and Bobby Axe are still out for each other’s blood, but now they’re also fighting for their own survival against new threats. Meanwhile, Wendy is “all in” for both her husband and her client, and this uncomfortable conflict could force her to make choices that will change everything. As always, money, power, justice, and revenge are on the menu.

The third season of Billions averaged a 0.23 rating in the 18-49 demographic and 875,000 viewers. Compared to season two, that’s down by 11% in the demo and down by 1% in viewers. Learn how Billions stacks up against the other Showtime TV shows.

Will Showtime cancel or renew Billions for season four? The ratings are on par with last season and Billions is one of Showtime’s higher profile series so I believe it will be renewed. For now, I’ll keep an eye on the Nielsens and update this page with breaking developments. Subscribe for free Billions cancellation and renewal alerts.

What do you think? Are you glad that the Billions TV show has been renewed for a fourth season? How would you feel if Showtime had cancelled this TV series, instead?

You both I love those shows on same annoying deal with use go to bed when there are on. Two more weeks left as this week right now. Westworld so good too I love it all should watch very intense show.

Love this show!!! One of the best in a long time.