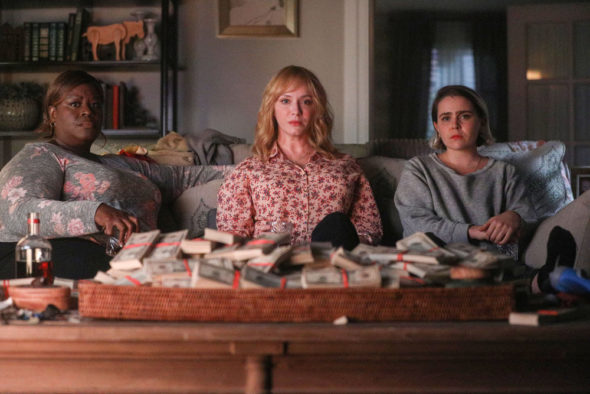 How low can the ratings go? Has the Good Girls TV show been cancelled or renewed for a fourth season on NBC? The television vulture is watching all the latest cancellation and renewal news, so this page is the place to track the status of Good Girls, season four. Bookmark it, or subscribe for the latest updates. Remember, the television vulture is watching your shows. Are you?

Airing on the NBC television network, Good Girls stars Christina Hendricks, Retta, Mae Whitman, Reno Wilson, Manny Montana, Lidya Jewett, Isaiah Stannard, and Matthew Lillard. The TV series centers on three suburban moms who’ve struggled to get by. They hold up the local Fine & Frugal supermarket, but their take far exceeds their expectations and find themselves in deep trouble with the local crime boss. In season three, the ladies each take on seemingly innocent jobs but each has a special purpose to aid them in their new criminal enterprise.

The third season of Good Girls averaged a 0.42 rating in the 18-49 demographic and 1.84 million viewers. Compared to season two, that’s down by 23% in the demo and down by 21% in viewership. Find out how Good Girls stacks up against other NBC TV shows.

Will NBC cancel or renew Good Girls for season four? The show has never attracted big ratings but the peacock network keeps renewing it anyway. The low ratings trend continues in year three but, I suspect that there will be a fourth season anyway. I’ll update this page with breaking developments. Subscribe for free alerts on Good Girls cancellation or renewal news.

What do you think? Are you glad that the Good Girls TV show has been renewed for a fourth season? How would you feel if NBC had cancelled this TV series, instead?

Omgeeeeee I love this show and I will be super bummed if the cancel Good Girls!!! This show is one of my favorite shows!!!

I love this show. Sexy and funny. Great entertainment

Just realized i haven’t watched any of season 3. They get into trouble, luck out, Beth somehow thinks she got them out of it and inflates her ego even more. Annie likes boy- Annie hates herself when her kid gets mad. Ruby is tired and her husband is upset at her. And repeat and repeat and repeat again.

love the show we can’t wait for Sunday to come

I love the good girls and I have recommended it to several people who are now fans. I am anxiously awaiting seasonfour.

B Fust
Reply to  J B Roper

I love love love Good Girls. Been watching from the start and hope they do not cancel it. Now my husband is watching it also and is asking when is the next episode.