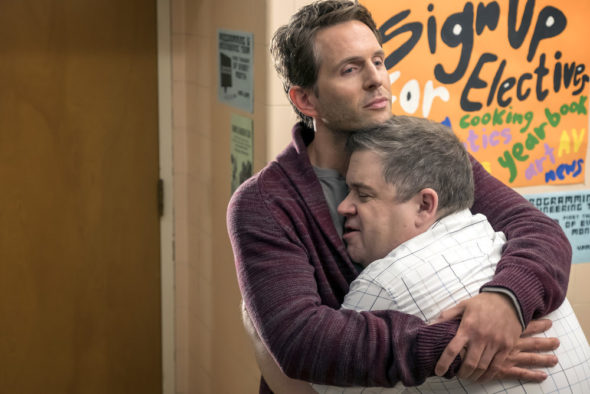 Is Jack still “teaching” at Whitlock High? Is the AP Bio TV show been cancelled or renewed for a second season on NBC? The television vulture is watching all the latest cancellation and renewal news, so this page is the place to track the status of AP Bio, season two. Bookmark it, or subscribe for the latest updates. Remember, the television vulture is watching your shows. Are you?

The first season of AP Bio averaged a 0.72 rating in the 18-49 demographic and 2.65 million viewers. Find out how AP Bio stacks up against other NBC TV shows.

Will NBC cancel or renew AP Bio for season two? Other than the special Sunday airing, the ratings have been quite low so I suspect that this sitcom will be cancelled. I always enjoy an after-school snack, so for now, I’ll update this page with breaking developments. Subscribe for free AP Bio cancellation or renewal alerts.

What do you think? Did you hope AP Bio would be renewed for a second season? How would you feel if NBC had cancelled this TV show, instead?

I don’t care for most sitcoms aired today. But, I really enjoy A.P. Bio., Would hate to see it cancelled.

I would love for AP Bio to renew season 2. I enjoy the show in all of its cringe moments and hilarity. Please renew!!!

I can’t understand how Seth Meyers can be the executive producer for this mean-spirited program that puts public school teachers, principals, and students down with every “joke”. It sorely misrepresents the profession. I hope it is cancelled mid-season.

Get a sense of humor, you believe that everything on TV represent reality? It’s a comedy, no one watching believes this is how teachers are school really are.

After teachers died in Florida protecting students, AP BIO demeans teachers as lazy morons. Fire the Harvard loser. He doesn’t belong in a school. The union Rep, too, was a stereotype of an angry black woman. This show was offensive, racist, and not funny except for the sex ed part.
Not worth renewing.

Watching some of the episodes, I believe there is room for growth for the lead. In a scene where the coach subs in and degrades the other students, we see that the lead, Jack, is appreciative of his students’ individual characteristics and helps them grow positively in lieu of teaching the course itself. As a comedy, it’s not meant to accurately document how instructors do their jobs, but does a good job in showing how instructors can help (humorously) their students.

I find it unconscionable to use a school shooting in attempting a contrived point. Completely unanaligous.

I’ve worked for years as a teacher. Like it or not, Jack is analogous to many teachers in the profession today. I got out of Middle School teaching because, where I worked, it had become a social circle full of grown women trying to outdo one another in fashion, vacation plans, and administrator merit; it has stopped being about the kids. It was a joke. If this program offends you, you’re probably one of the lazy ones who doesn’t want to be outed. Also, as another commenter has already mentioned, using dead children to condemn a comedy is just vile.