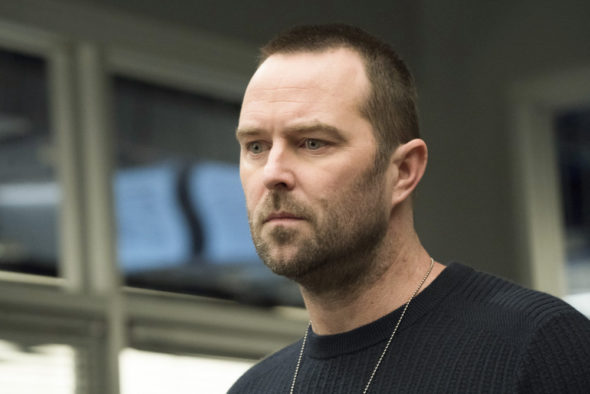 Where will Jane Doe’s story end? Has the Blindspot TV show been cancelled? Renewed for a sixth season on NBC? The television vulture is watching all the latest cancellation and renewal news, so this page is the place to track the status of Blindspot, season six. Bookmark it, or subscribe for the latest updates. Remember, the television vulture is watching your shows. Are you?

Airing on the NBC television network, Blindspot stars Sullivan Stapleton, Jaimie Alexander, Rob Brown, Audrey Esparza, Ashley Johnson, Ennis Esmer, and Mary Elizabeth Mastrantonio. After amnesiac “Jane Doe” (Alexander) is found in Times Square, FBI Agent Kurt Weller (Stapleton) and his team work to decipher her intricate tattoos. Despite a web of conspiracy and corruption, they begin to uncover clues, as well as Jane’s identity. In the fifth and final season, the team is on the run. Jane and the surviving members of the former FBI taskforce race against the clock to clear their names.

The fifth season of Blindspot averaged a 0.29 rating in the 18-49 demographic and 1.90 million viewers. Compared to season four, that’s down by 38% in the demo and down by 31% in viewership. Find out how Blindspot stacks up against other NBC TV shows.

We don’t have to wonder if NBC will cancel or renew Blindspot for season six. The network has already announced that season five is the end of the line. Could some of the characters return one day? Subscribe for free alerts on Blindspot cancellation or renewal news.

What do you think? Do you think that the Blindspot TV show should have been renewed for a sixth season on NBC?

I miss this show
I don’t watch alot of television but I do stream alot. I just found this show a few years ago and watched all the seasons back to back in a short while. I would have been a loyal supporter if I had known about it. Wish it would come back somehow!

I wish this show had not been cancelled. The last show felt like it went too fast and covered too much for an ending. And I was in shock. She died, she didn’t die. No, she really died.
I would love a spin-off. Love all the main characters. Love Patterson. Even loved Bill Nye the science guy.

Season 6 should come back

Blind spot should have a season 6. Each show kept you on the edge of your seats. Full of action, espionage and suspense. Great acting. You get involved with the characters. Hate to see it come to an end

the show was weak to begin with; yet it had potential; and it just got weaker by the season, it was time a season or two ago.

This show deserves another chance.Characters are g

This show deserves another season. Characters are great and the p!ots interesting.