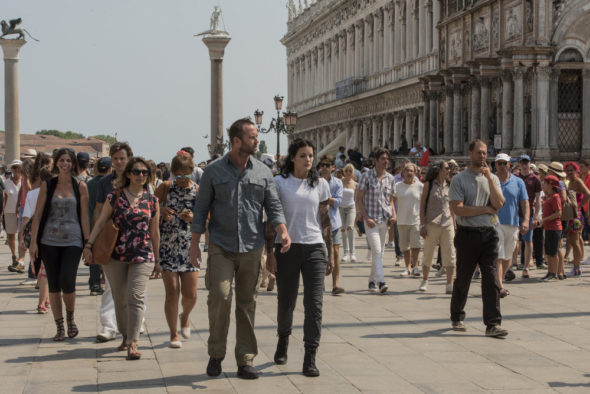 Are Weller and Jane still on the right in the third season of the Blindspot TV show on NBC? As we all know, the Nielsen ratings typically play a big role in determining whether a TV show like Blindspot is cancelled or renewed for season four. Unfortunately, most of us do not live in Nielsen households. Because many viewers feel frustration when their viewing habits and opinions aren’t considered, we’d like to offer you the chance to rate all the Blindspot season three episodes here.

An NBC action thriller, Blindspot stars Sullivan Stapleton, Jaimie Alexander, Rob Brown, Audrey Esparza, Ashley Johnson, and Luke Mitchell. After amnesiac “Jane Doe” (Alexander) is found in Times Square, FBI Agent Kurt Weller (Stapleton) and his team work to decipher her intricate tattoos. Despite a web of conspiracy and corruption, they begin to uncover the clues therein, as well as Jane’s identity. The third season kicks off 18 months after the events of the season two finale. Although they parted ways thanks to a series of mysterious circumstances, the team must reunite to handle a new crisis.

What do you think? Which season three episodes of the Blindspot TV series do you rate as wonderful, terrible, or somewhere between? Should NBC cancel or renew Blindspot for a fourth season? Don’t forget to vote, and share your thoughts, below.

I am relieved this has been renewed. And what a finale!! Didn’t see that coming… Very cleverly done. Taking us full circle and keeping the focus and momentum on the tattoos, which is the fundamental core of the program. Looking forward to seeing where Season 4 takes us!! Don’t get me wrong, I love Jane more than I’ll ever like Remi and I’m hoping Jeller wins in the end, but what a brilliant twist in the tail… I am going to miss Roman though, but to continue with the storylines his character did need to come to an end. Shame… Read more »

It was good to see a bit of Cape Town! It is also disappointing to see Jane go beserker again. I don’t know which is worse, Zapata’s treachery or Jane’s reversion. It does provide some good questions to mull over, though. The action is good. The camera man needs to employ a different technique. Hopefully they will have good funding.

Really loved this show until this last episode. Was happy about some things but hated hated the ending. Really not happy with what they’re doing with Jane. So that’s 2 shows I can cut out Quantico and Blindspot. I still have Blacklist for now. I know most will have liked this episode I just don’t want it to go that way.

Love this show, it gets better every season, I haven’t missed an episode.

Great show. Keep it. Haven’t missed an episode. Even when I had to watch it on the internet because cable screwed up.

Love this show. Have watched it from the beginning. Please don’t cancel it!!

I am addicted and am spreading and investing people with the addiction all over the world. Please don’t do away with our drug of choice….We love Jane Doe and Weller. Patterson and Rich.com are awesome. Shepherd and Zapata are captivating…..