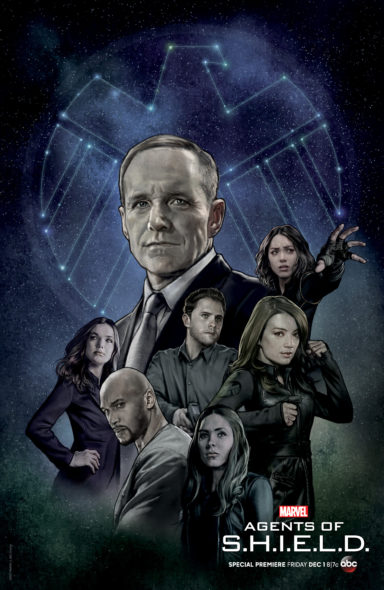 An ABC sci-fi action-adventure drama, Marvel’s Agents of SHIELD stars Clark Gregg, Ming-Na Wen, Chloe Bennet, Iain De Caestecker, Elizabeth Henstridge, Henry Simmons, and Natalia Cordova-Buckley. With Ghost Rider’s help, last season, Coulson (Gregg) and his team saved the world. At the end though, their celebration was cut short, and soon, Coulson was aboard a space ship. In season five, they will have figure out where they are and how to return home. Meanwhile, humanity’s time may be running out.

Best show on TV. Very few storylines have characters that you become so attached to. Sometimes the Plot feels like a rollacoaster with one major crisis on the heels of another but the writers always manage to hook and draw you into the plot through the acting and the suspense of disbelief that allows you to be drawn into the intricacies of each and every central character as they struggle through whatever is thrown their way. It would be nice however to see them get some breathing time and re-establish some structural support for shield ” the umbrella structure itself.”… Read more »

Please don’t cancel shield! I love all the heroes and their stories

FAVORITE SHOW !!! KEEP THIS COMING BUT WHYYY DID THEY HAVE TO KILL FITZ ( crying hysterically still)

Entertaing, interesting and family oriented. PLEASE DO NOT CANCEL

Beyond a doubt, the BEST show on television! Thank you for renewing it for a 6th season! Hopefully it will continue past that!

No it won’t and it shouldn’t