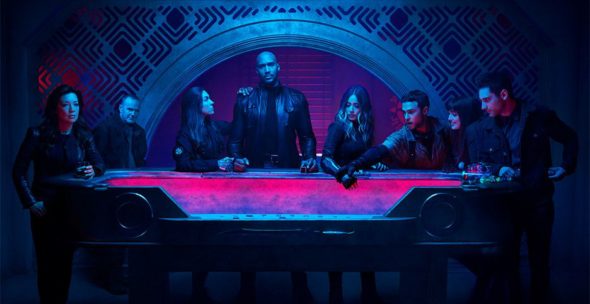 Are the S.H.I.E.L.D. agents still at the top of their game during the sixth season of Marvel’s Agents of SHIELD TV show on ABC? As we all know, the Nielsen ratings typically play a big role in determining whether a TV show like Marvel’s Agents of SHIELD is cancelled or renewed for season seven. Unfortunately, most of us do not live in Nielsen households. Because many viewers feel frustration when their viewing habits and opinions aren’t considered, we’d like to offer you the chance to rate all the Marvel’s Agents of SHIELD season six episodes here. *Status update below.

An ABC sci-fi action-adventure drama, Marvel’s Agents of SHIELD stars Clark Gregg, Ming-Na Wen, Chloe Bennet, Iain De Caestecker, Elizabeth Henstridge, Henry Simmons, Natalia Cordova-Buckley, and Jeff Ward. Last season, the team time-traveled to a dystopian future from which they had to save the world. In the sixth season, they have to come to terms with the fact that while tampering with the laws of time and space and time may have gotten the job done, it couldn’t save everyone they love.

*7/18/19 update: ABC has announced that season seven will be the end for Marvel’s Agents of SHIELD.

thanks for bringing it back…..

Excellent DIRECTING of this episode by Clark Gregg, aka Former S.H.I.E.L.D. Director Coulson!