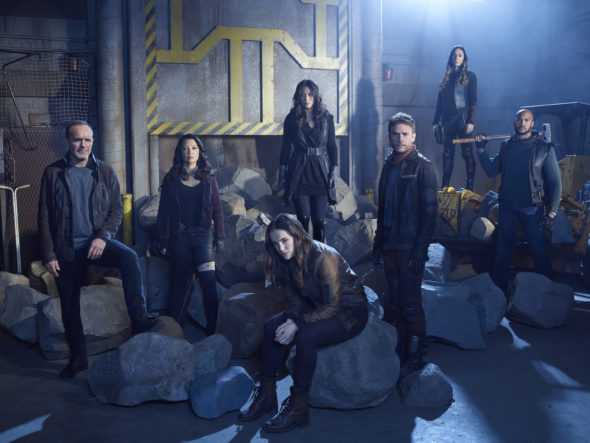 Maybe the Strategic Homeland Intervention, Enforcement, and Logistics Division rigged this one. Despite ratings similar to those that saw Once Upon a Time cancelled, ABC has renewed its Marvel’s Agents of SHIELD TV show for a sixth season of just 13 episodes.

Marvel’s Agents of SHIELD: A Look at the Ratings

Word is that the sixth season renewal came down to the wire. While the show is weak in traditional ratings, it does well in DVR viewing and is a strong seller internationally. It also helps to keep the Marvel brand in front of audiences and the network didn’t have any new Marvel shows in development for next season. Marvel’s Inhuman’s was cancelled last week.

The network has ordered 13 episodes for a likely mid-season run. It’s unknown if Marvel’s Agents of SHIELD will continue to air on Friday nights or if this will be the final season.

What do you think? Are you still watching Marvel’s Agents of SHIELD TV series? Did you think it would ABC would cancel or renew it for season six?

I love “Marvel’s Agents of Shield”. I would absolutely hate for the show to be cancelled or have it’s final season! I’m sad to hear it won’t have a full run this season, but 13 episodes is better than none! C’mon ABC DON’T THROW IN THE TOWEL ON AGENTS OF SHIELD!! P L E A S E!!

Marvel’s Agents of Shield deserves to be around for another season. I am glad I kept watching through the lame sky-daisy name changing thing, because the storylines are SO much better than alot of the boring junk on tv. Fitz and Simmons can scientifically explain and justify just about anything! Good choice! (P.S. I’m sooo glad Once Upon A Time got the axe! Go ABC!)

After the last season, there was some loose ends to tie up. Honestly, they have done a great job, in my opinion, making each season tell a different story, while keeping the characters evolving but true to themselves. I’m hoping they will at least utilize Season 6 to wrap up some loose ends and let some “well deserving heros” have a happy ending.

Honestly, after last season’s finale, I really thought that it was the end. I hope it’s back next year.

Excellent show, gripping stories and characters you can emphatise with. Sci-fi escapism that us hooked. Keep this show running for as long as possible as the avengers have no clue coulson is alive!!!! Which is brilliant in terms of covert operations if you think about it…

Love this show! We need more.

Avid fan of the show, I can’t wait to watch the next episodes.

I absolutely love Agents of Shield – crazy ending to season 5 felt like it was meant to be the end, I hope the 13 episodes of Season 6 stay as amazing as the rest of the series. So glad it’s being renewed!

Not surprised about Inhumans really, Agent Carter was way better and barely made it through season 2.

This season was very difficult to follow. However, I did watch every episode. I will continue to watch season 6. I love the show. Please do not cancel.