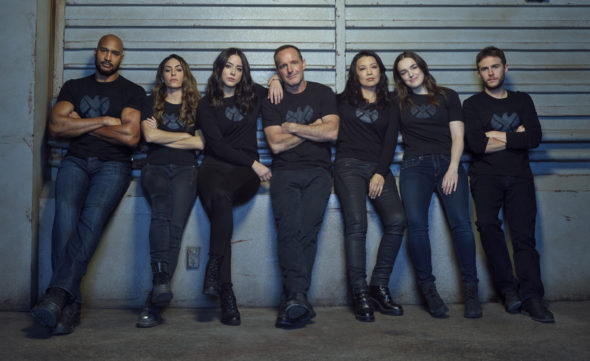 “SHIELD” is now a summer show. Or at least, it will be in 2019 when it returns during our warmest months.

“By putting it in the summer, we feel like we’re going to be able to super-serve the fanbase that loves that show, and hopefully give it an opportunity to continue on longer than it would if it lived in season,” ABC Entertainment chief Channing Dungey said Tuesday on a call with press.
[…]
“I actually personally felt this season that we just had, Season 5, was their creatively strongest yet,” Dungey told reporters. “So I don’t at any moment have any plans to think of Season 6 as the last season.”

What do you think? Are you okay with the shorter season and delayed premiere for the sixth season of Marvel’s Agents of SHIELD TV series?

You can’t keep a great show Down
Somebody get ur head out of ur bottom
And get the show on the Air
Chrimany!!!!!!!!!!

I started dancing with joy, finding out that ABC will renew my FAVORITE SHOW , AGENTS OF SHIELD!! <3 Yeay! Thank you, thank you, THANK YOU ABC for listening to us, the FANS! <3 <3 <3 And THANK YOU to the "Whedon's , and the AMAZING CAST, for giving us viewers this SUPER-FANTASTICO AMAZING Marvel Show! And to turn "Shield" into a summer show, sounds PERFECT for my schedule. Of course, I would watch this show ANY TIME….. 😉 Hoping that May have some "last minute miracle drug"; or that the Asgardians decide to help him, so that PHIL COULSON… Read more »

I hope they don’t make the show shorter. Really like the show..good tv.

Still the best of the Marvel shows, so deserves for there to be more.