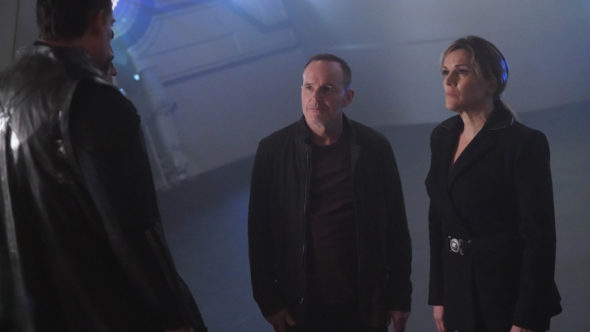 While fans of Marvel’s Agents of SHIELD have to wait until Summer 2019 to watch season six, they can rest easy knowing that the low-rated series won’t be cancelled soon. ABC has announced that they’ve already renewed the series for a seventh season. It’s unclear when season seven will air but the network hasn’t indicated that those episodes will be the end of the show (though that wouldn’t be much of a surprise at this point).

ABC PICKS UP ‘MARVEL’S AGENTS OF S.H.I.E.L.D.’ FOR A SEVENTH SEASON

“Marvel’s Agents of S.H.I.E.L.D.” was co-created by Joss Whedon, Jed Whedon & Maurissa Tancharoen, who also serve as executive producers along with Jeffrey Bell and Jeph Loeb.

“Marvel’s Agents of S.H.I.E.L.D.” is produced by ABC Studios and Marvel Television for ABC.

What do you think? Do you like the Marvel’s Agents of SHIELD TV show? Are you surprised that ABC gave the show an early renewal? Do you think season seven will be the end?

The last 3 seasons of this show really sucked. Time to Cancel!

Love love love this show!!!! I wish it never had to end, but I k la all good things must come to end someday just not today!!!

I love watching Agents of Shield. I am glad to hear that it will be on for at least 2 more seasons.

My kids and I love Marvel’s Agents of SHIELD!!! This is when we gather around the TV and speculate on aspects of real life as compared to the series. It’s important; especially nowadays!!!! Please keep creating new thoughtful episodes!! Thank you 🙂

I have watched this from the beginning. I am so glad it will continue.

I’m thrilled they’ll be two more seasons (hopefully longer!). I watched the first season then had so many other shows to watch that I didn’t keep up with it! I then had some free time and started binge-watching it – I got hooked and now can’t wait for the next season to start! I read that Clark Gregg may be directing and no longer in the role of Phil Coulson any longer – though I’m sure he’ll be great in that capacity, I wish he would still be back occasionally in his role of Coulson. He was my favorite on… Read more »

I agree with the comments it’s a great show and for once the people over 49 are still able to see it for 2 more seasons. Kudos to those who kept it on.

I love the show and I am super happy I will be getting at least 2 more seasons out of it but I am very surprised that it got renewed (even for season 6 let alone now season 7) because of its low ratings. Nonetheless, I am not complaining. Looking forward to the new season this summer!

I am very happy