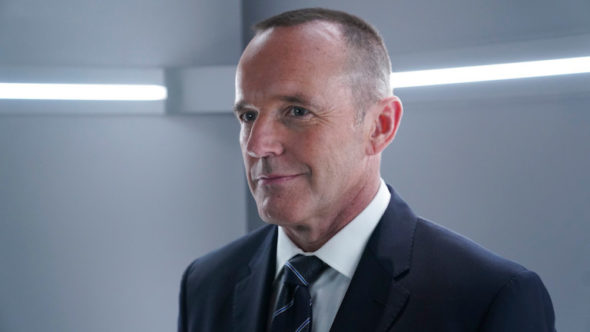 What’s next for Marvel’s Agents of SHIELD? ABC just announced the premiere date for the TV show’s seventh and final season.

The seventh and final season of Marvel’s Agents of SHIELD premieres on ABC on May 27th at 10 p.m. ET/PT.

From ABC Studios and Marvel Television, “MARVEL’S AGENTS OF S.H.I.E.L.D.” returns for its seventh and final season on WEDNESDAY, MAY 27 (10:00 – 11:00 p.m. EDT). Coulson and the Agents of S.H.I.E.L.D. are thrust backward in time and stranded in 1931 New York City. With the all-new Zephyr set to time-jump at any moment, the team must hurry to find out exactly what happened. If they fail, it would mean disaster for the past, present and future of the world. “Marvel’s Agents of S.H.I.E.L.D.” stars Clark Gregg as Agent Phil Coulson, Ming-Na Wen as Agent Melinda May, Chloe Bennet as Daisy Johnson, Elizabeth Henstridge as Agent Jemma Simmons, Iain De Caestecker as Agent Leopold Fitz, Henry Simmons as Director Alphonso “Mack” MacKenzie, Natalia Cordova-Buckley as Elena “Yo-Yo” Rodriguez and Jeff Ward as Deke Shaw. “Marvel’s Agents of S.H.I.E.L.D.” was co-created by Joss Whedon, Jed Whedon & Maurissa Tancharoen, who also serve as executive producers along with Jeffrey Bell and Jeph Loeb.”

What do you think? Are you a fan of Marvel’s Agents of SHIELD? How do you think the show will end?

I love the series wished I had been watching . my son just got into Robbie as ghost rider. Then heard he was getting his own show then that idea was crushed.any way hope maybe the might try one more time…

I really like it although sometimes I did get a little confused I will admit.

We have enjoyed both Agents of Shield and agent Carter

Finally! I was thinking they might not come back.