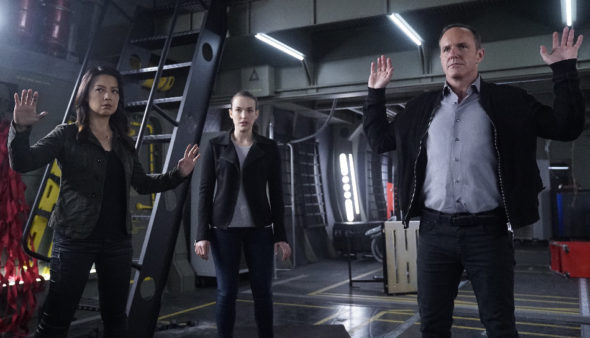 Is Marvel’s Agents of SHIELD coming to an end? Recently, co-showrunners Maurisa Tancharoen and Jed Whedon spoke with TVLine about the future of the ABC TV show.

At a recent celebration for Agents of SHIELD‘s 100th episode, co-showrunner Jed Whedon told TVLine they are writing the season five finale as a series finale just in case ABC does not renew the show:

Yeah, we’re ready for if this is the end. We’re definitely going to make it rewarding either way.”

We can certainly pivot and there are certain things that we’re putting in that at the last minute could be adjusted. But we know at the end we’re not moving off that mark. We’re going to do what we were planning to do, and I think that it’ll be thrilling either way.”

What do you think? Are you a fan of Marvel’s Agents of SHIELD? Do you want a sixth season?

I truly hope it gets renewed. This is the only show that can correspond with the movies and hold true to the storylines.

Give it one more season to see if the ratings go up. I love the show but all good things come to an end. So few well written sci-fi on TV. Hope it can keep going but the executives will make that decision. Look how TIMELESS was picked up by another network just through fans letter writing.

So many good shows are being cancelled. I hope Marvel’s Agents of SHIELD isn’t one of them and is renewed for Season 6!

Big fan, will be really upset if it’s canceled.