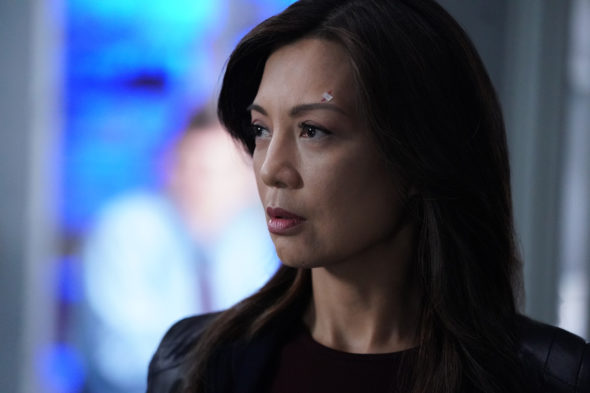 Is this the end for S.H.I.E.L.D.? Is Marvel’s Agents of SHIELD TV show cancelled or renewed for a seventh season on ABC? The television vulture is watching all the latest cancellation and renewal news, so this page is the place to track the status of Marvel’s Agents of SHIELD, season seven. Bookmark it, or subscribe for the latest updates. Remember, the television vulture is watching your shows. Are you?

A sci-fi action-adventure drama airing on the ABC television network, Marvel’s Agents of SHIELD stars Clark Gregg, Ming-Na Wen, Chloe Bennet, Iain De Caestecker, Elizabeth Henstridge, Henry Simmons, Natalia Cordova-Buckley, and Jeff Ward. Last season, the team time-traveled to a dystopian future from which they had to save the world. In season six, they have to come to terms with the fact that while tampering with the laws of time and space and time may have gotten the job done, it couldn’t save everyone they love.

Don’t spend season fretting about whether ABC will cancel or renew Marvel’s Agents of SHIELD for season seven, since it was picked up six months ahead of the season six debut. At first blush, it seems odd that such a low-rated series scored such an early renewal, but remember Disney owns both ABC and Marvel, so this show’s long life has more to do with the Marvel brand than Nielsen ratings. Now we’ve got to figure out whether that renewal was actually for a seventh and final season, so I’ll keep this page up to date and monitor things from my perch. Subscribe for free alerts on any Marvel’s Agents of SHIELD cancellation or renewal news.

7/18/19 update: ABC has announced that season seven will be the end for Marvel’s Agents of SHIELD.

What do you think? Are you glad that the Marvel’s Agents of SHIELD TV show has been renewed for a seventh and final season? Should it have been renewed past that point?