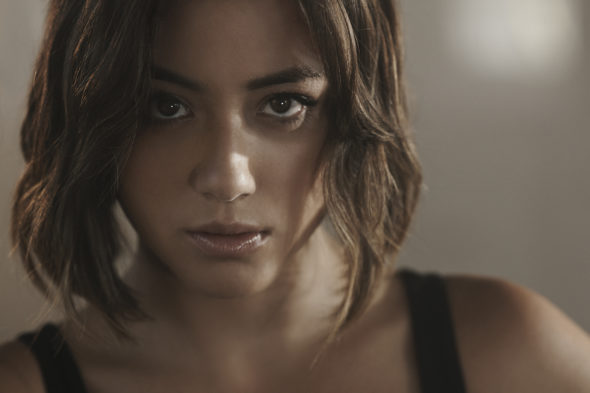 Are Phil Coulson and his team of S.H.I.E.L.D. agents still on the job? Is Marvel’s Agents of SHIELD TV show cancelled or renewed for a sixth season on ABC? The television vulture is watching all the latest cancellation and renewal news, so this page is the place to track the status of Marvel’s Agents of SHIELD, season six. Bookmark it, or subscribe for the latest updates. Remember, the television vulture is watching your shows. Are you?

A sci-fi action-adventure drama airing on the ABC television network, Marvel’s Agents of SHIELD stars Clark Gregg, Ming-Na Wen, Chloe Bennet, Iain De Caestecker, Elizabeth Henstridge, Henry Simmons, and Natalia Cordova-Buckley. With Ghost Rider’s help, last season, Coulson (Gregg) and his team saved the world. At the end though, their celebration was cut short, and soon, Coulson was aboard a space ship. In season five, they will have figure out where they are and how to return home. Meanwhile, humanity’s time may be running out.

Since Disney is the parent company for both ABC and Marvel, it seems that perhaps the ratings matter less than promoting the brand. I believe that Marvel’s Agents of SHIELD will be renewed for a sixth and final season. Still, since this fifth season will ensure a good-sized package for syndication, it’s not crazy to think this Marvel Comics Universe series could end here. For now, I’ll keep an eye on the ratings and update this page with breaking developments. Subscribe for free alerts on any Marvel’s Agents of SHIELD cancellation or renewal news.

What do you think? Are you glad that the Marvel’s Agents of SHIELD TV show has been renewed for a sixth season? How would you feel if ABC had cancelled this TV series, instead?

Agents of SHIELD showrunners Jed Whedon and Maurissa Tancharoen have revealed that season six will end on a cliffhanger.

Speaking to Digital Spy and other outlets at WonderCon, the creatives discussed how being renewed for two more seasons, both of which have a shorter episode order of 13, has impacted the show.

Asked if it’s affected their writing, Whedon replied: “Yes, in that we can end season six with just a massive question mark… and then answer it later. – source Digital spy

love this show never cancel it