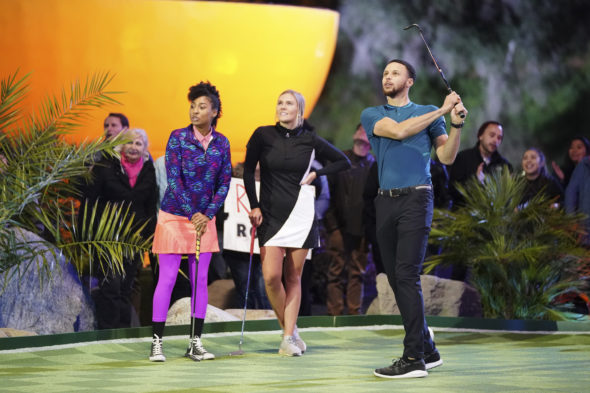 Is it time for another round? Has the Holey Moley TV show been cancelled or renewed for a second season on ABC? The television vulture is watching all the latest cancellation and renewal news, so this page is the place to track the status of Holey Moley, season two. Bookmark it, or subscribe for the latest updates. Remember, the television vulture is watching your shows. Are you?

The first season of Holey Moley averaged a 0.68 rating in the 18-49 demographic and 3.22 million viewers. Find out how Holey Moley stacks up against other ABC TV shows.

Will ABC cancel or renew Holey Moley for season two? The ratings started alright but the numbers have been dropping each week. I think it will be renewed but, obviously, that trend isn’t a good sign. I’ll update this page with breaking developments. Subscribe for free alerts on Holey Moley cancellation or renewal news.

What do you think? Are you glad that the Holey Moley TV show has been renewed for a second season? How would you feel if ABC had cancelled this TV series, instead?

The show Holey Moley is a great show, excepting for Rob Riggle. On the last episode I watched, he said a contestant looked like Jesus, and he made mockery of prayer and Christianity in general. Lots of OMG’s too. Mocking and using God’s name in vain is very offensive to a true Christian believer. Stephen Curry and Joe Tessitore are great hosts.

It is just a silly show you see to laugh and have a good time when you are board. Renew it. The only bad part is we know nothing about the people. But it like you not supposed root for anyone so it all good.