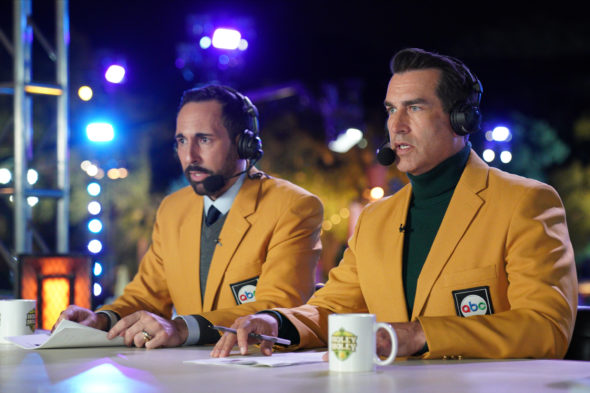 Has the network brought their “A” game? Has the Holey Moley TV show been cancelled or renewed for a third season on ABC? The television vulture is watching all the latest cancellation and renewal news, so this page is the place to track the status of Holey Moley, season three. Bookmark it, or subscribe for the latest updates. Remember, the television vulture is watching your shows. Are you?

Airing on the ABC television network, the second season of Holey Moley (aka Holey Moley II: The Sequel) features self-proclaimed mini-golf lovers from around the country as they compete head-to-head through an obstacle-filled golf course. In each episode, eight contestants put their miniature golf and physical skills to the test as they face off in crazy challenges on the supersized course. The winners of each episode return to the “Holey Moley” course for the all-star grand finale, where only one will be crowned the winner and claim the $250,000 prize. Executive producer Stephen Curry serves as the resident golf pro, with Rob Riggle on color commentary, Joe Tessitore providing play-by-play, and Jeannie Mai as a sideline correspondent.

The second season of Holey Moley averaged a 0.60 rating in the 18-49 demographic and 3.35 million viewers. Compared to season one, that’s down by 12% in the demo and up by 4% in viewership. Find out how Holey Moley stacks up against other ABC TV shows.

Will ABC cancel or renew Holey Moley for season three? This series didn’t do all that well in its first season but the network clearly wants it to succeed. They expanded the set and ordered even more episodes for Holey Moley II: The Sequel. The ratings have been pretty good so, I think it will be renewed. I’ll update this page with breaking developments. Subscribe for free alerts on Holey Moley cancellation or renewal news.

2/23/21 update: Holey Moley has been renewed through season four.

What do you think? Are you glad the Holey Moley TV show has been renewed through a fourth season? How would you feel if ABC had cancelled this TV series, instead?

After enjoying the program last year I was looking forward to it’s coming back. Unfortunately I felt something was missing, it wasn’t the same but I couldn’t put my finger on it. I was going to give it another chance until I sat through the commercials and that was all I needed. I won’t watch this again. To use the word holy in your name is disgraceful. There is nothing holy about this show.

I don’t think holEy is meant to be disgraceful. I think it refers to the holes they shoot for because there is an E in it. But to each his own.

Please bring back It back!!