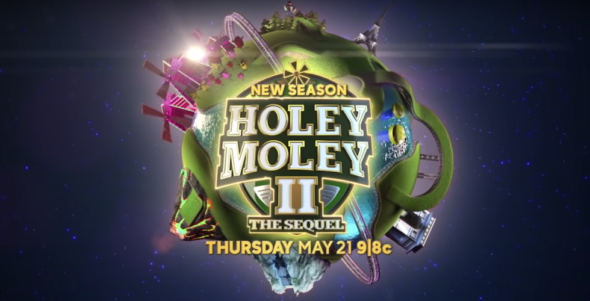 Though Holey Moley didn’t do all that well in the ratings in its first season, ABC still renewed it for season two. They also expanded the set, ordered even more episodes, and gave it a fun new title — Holey Moley II: The Sequel. Will this move help draw more viewers. Will Holey Moley be cancelled or renewed for season three? Stay tuned.  *Status Update Below.

An ABC miniature golf competition, the second season of Holey Moley features self-proclaimed mini-golf lovers from around the country as they compete head-to-head through an obstacle-filled golf course. In each episode, eight contestants put their miniature golf and physical skills to the test as they face off in crazy challenges on the supersized course. The winners of each episode return to the “Holey Moley” course for the all-star grand finale, where only one will be crowned the winner and claim the $250,000 prize. Executive producer Stephen Curry serves as the resident golf pro, with Rob Riggle on color commentary, Joe Tessitore providing play-by-play, and Jeannie Mai as sideline correspondent.

9/18 update: You can see the latest night’s ratings in context.

For comparisons: Season one of Holey Moley on ABC averaged a 0.68 rating in the 18-49 demographic and 3.22 million viewers.

What do you think? Do you like the Holey Moley TV series on ABC? Should it be cancelled or renewed for a third season?

*2/23/21 update: Holey Moley has been renewed through season four.

I love Holey Moley leave it on please and thanks.

My son lives in NYC and I live in Ohio. We FaceTime weekly just to watch Holey Moley. We love mini golf and would hate to see this show end!

Love the show , don’t want to miss an episode
Missed the finale would like to know how to find it

A show the whole family can watch and enjoy! So silly and refreshing …..a needed relief. Please renew this show!

We LOVE Holey Moley. Rob and Joe are so funny – love this show ! Renew it please. When is the season finale ??

I really like holey moley, but Rob Riddle has to go, he 8s NOT funny

Please do not cancel Holy Moley!!! My husband and I love this show.

My husband and I absolutely love the show it is so funny… it takes our minds off of everything. Every week we are looking forward to it …rigged or not rigged…. it’s so funny so hilarious and it’s what we need right now to get us through the day. Thank you so much looking forward to many continuous seasons

This show is for the fun of it and the silly humor in a time when we all can use an easy laugh or two. The producer needs to be mindful that fair play always plays well for the future as people DO pay attention.

I just finished watching season 2 episode 5 where the white buffalo won the competition after being beaten by the IT guy in round 2 so I will never watch the show again it was rigged and then at the last hole, White Buffalo guys ball was moved closer to the hole and straight on if you count the green blocks from the side of the putting area you’ll see that the ball was moved so the show is rigged so I’ll never watch it again I often wonder how many of these game shows are rigged and now with… Read more »

100% was so easily spotted….what a shame rip

This show is rigged! Watching the hole that put the White Buffalo in the final, you the ball go over the hump heading towards the water. Then the camera angle changes and the ball is coming from behind the block and into the hole. There is no camera shot showing the whole track of the ball. Then in the final he wins! Go figure!

Agreed, I loved season 1 and my wife and I got a lot of friends to watch it with us. We wont be coming back to Season 3 because of this, I hate TV because of this crap.