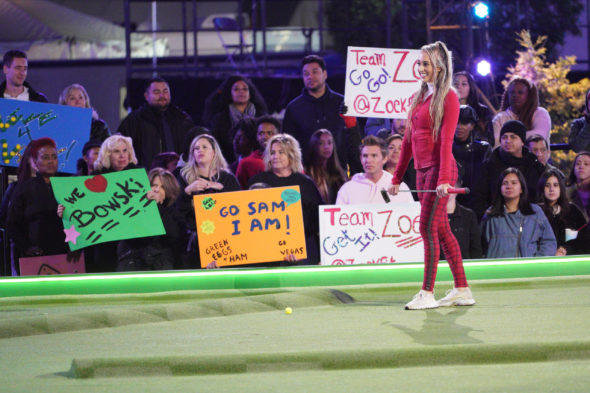 ABC will air the second season finale of Holey Moley next week but that won’t be the end of the game show. The network will air a pair of specials that will give viewers a behind-the-scenes look at the crazy golf competition.

ABC revealed more about the specials in a press release.

Hosted by commentating team Rob Riggle and Joe Tessitore, the can’t-miss special episodes will give viewers an inside look into the making of the world’s craziest competition series, as they answer burning fan questions and share memorable on set moments straight from the iconic Holey Moley clubhouse. Viewers will relive the best and worst wipeouts, watch unforgettable never-before-seen putts, learn more about “Holey Moley” course favorites Course Marshall Joe and Sir Goph, plus check in on season one winners. Resident golf pro and executive producer Stephen Curry and sideline correspondent Jeannie Mai will also be featured.

Holey Moley showcases self-proclaimed miniature-golf lovers from around the country as they compete head-to-head through a series of matchups on an unparalleled, epic obstacle golf course. In its sophomore season, ABC’s “Holey Moley” ranks as the No. 1 program in the Thursday 8 p.m. hour this summer in Adults 18-49. Based on 35 days of viewing on linear and digital platforms this summer, “Holey Moley” is up versus its year-ago average by 17% in Total Viewers and by 4% in Adults 18-49. New episodes of Holey Moley return to ABC this week beginning THURSDAY, SEPT. 3 (8:00-9:00 p.m. EDT).

What do you think? Are you a fan of the Holey Moley TV series on ABC? Will you watch these two specials?

Hell Yes! I am a fan of Holey Moley and I hope and pray that there is a 3 season next year. I will DVR the special if I am not at home and will watch the special.

Love the show and can’t wait for the show returning.