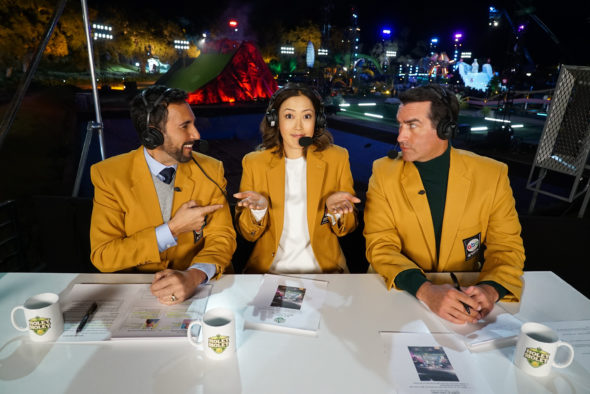 This golf game isn’t over. ABC has renewed its summer game show, Holey Moley, for a second season. Season two episodes will begin airing in Summer 2020.

A miniature golf competition, Holey Moley features 12 contestants facing off, on a supersized mini-golf course, in head-to-head sudden-death matchups. Executive producer Stephen Curry serves as the resident golf pro, with Rob Riggle on color commentary, Joe Tessitore providing play-by-play, and Jeannie Mai as a sideline correspondent. Only three players make it to “Mt. Holey Moley,” the final hole. The ultimate winner leaves with a $25,000 prize, as well as “The Golden Putter” trophy, and a “Holey Moley” plaid jacket.

The first season of Holey Moley averaged a 0.68 rating in the 18-49 demographic and 3.22 million viewers. Of ABC’s 14 Summer TV series, Holey Moley’s ratings landed it in the middle of the pack.

ABC today announced the new season pickup of “Holey Moley,” following its successful “Summer Fun & Games” debut on the network earlier this year. In the show’s second season, set to air in summer 2020, the world’s most extreme mini-golf obstacle course will return as all-new competitors take on daring new challenges in an attempt to win a cash prize. The season two course will be bigger and better than ever, featuring all-new holes, and bringing more drama, trick shots and hysterically impressive wipeouts. Rob Riggle and Joe Tessitore will return as color and play-by-play commentators, respectively, while Jeannie Mai will resume her role as sideline correspondent. NBA superstar Stephen Curry serves as an executive producer as well as the “Holey Moley” resident golf pro.

“Holey Moley” is the first-of-its-kind mini-golf competition series that showcases self-proclaimed miniature-golf lovers from around the country as they compete head-to-head through a series of matchups on an unparalleled, epic obstacle golf course. In its second season, eight competitors will test their skills on the “Holey Moley” course every week. Round one winners move on to round two; and from there, the finalists face off on the daunting “Mt. Holey Moley” hole. At the end of every episode, only one competitor will be crowned the winner and walk away with the $25,000 prize, “The Golden Putter” trophy and coveted “Holey Moley” plaid jacket.

ABC’s “Holey Moley” debuted last summer with strong time-period improvement for ABC, building the hour over original programming by 22% in Total Viewers and 50% with Adults 18-49 to draw the Net’s largest summertime audience to the slot in 4 years. In August, it was announced that “Holey Moley” was nominated for the Series Launch of the Year at the Content Innovation Awards in Cannes. The award ceremony takes place at MIPCOM in October.

About ABC Entertainment
ABC Entertainment airs compelling programming across all day parts, including “Grey’s Anatomy,” the longest-running medical drama in prime-time television; riveting dramas “The Good Doctor,” “How to Get Away with Murder,” “A Million Little Things” and “Station 19”; the Emmy® Award-winning “Modern Family” and trailblazing comedy favorites “American Housewife,” “black-ish,” “Bless This Mess,” “The Conners,” “The Goldbergs,” and “Schooled”; the popular “Summer Fun & Games” programming block, including “Card Sharks,” “Celebrity Family Feud,” “Holey Moley” and “Press Your Luck”; star-making sensation “American Idol”; reality phenomenon “Shark Tank”; “The Bachelor” franchise; long-running hits “Dancing with the Stars” and “America’s Funniest Home Videos”; “General Hospital,” which has aired for more than 55 years on the network; and late-night talk show “Jimmy Kimmel Live!”; as well as the critically acclaimed hit special “Live in Front of a Studio Audience: Norman Lear’s ‘All in the Family’ and ‘The Jeffersons.’” The network also boasts some of television’s most prestigious awards shows, including “The Oscars®,” “The CMA Awards” and the “American Music Awards.”
ABC programming can also be viewed on ABC.com, the ABC app and Hulu.

What do you think? Did you watch the first season of Holey Moley on ABC? Are you glad that it’s been renewed for a second season?

OMG! They canceled THE KIDS ARE ALRIGHT but renewed this junk? What in the world are you thinking ABC? Oh, wait, you aren’t I guess. Your programming is pretty laughable. We watch THE ROOKIE, WHEEL & JEOPARDY…. and that’s it!