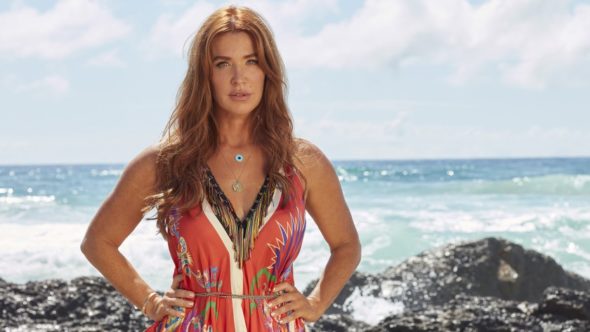 ABC has cancelled their second drama series of Summer 2019, Reef Break, after one season. The network previously dropped freshman entry Grand Hotel. Both had very low ratings and were outperformed by game shows and reality programs.

A crime drama, Reef Break stars Poppy Montgomery, Ray Stevenson, Desmond Chiam, Melissa Bonne, and Tamala Shelton. The series centers on Cat Chambers (Montgomery), a former thief. These days, she works as the fixer for the governor of a beautiful Pacific Island paradise — “The Reef.” Thanks to her checkered past, Cat has a deep understanding of criminals and the crimes they commit. As a real risk-taker, she runs toward adventure, not from it.

The first season of Reef Break averaged a mere 0.31 rating in the 18-49 demographic and just 1.96 million viewers. It was ABC’s lowest-rated summer series, ranking 14th of 14 series. Of the 57 summer network TV shows, Reef Break ranked 39th out of 57 shows. It only beat out a bunch of CW shows, What Just Happened??! with Fred Savage on FOX and season one of The Good Fight on CBS (which had already been released on CBS All Access).

While ABC has cancelled Reef Break and Grand Hotel, the network has already renewed numerous reality and game shows. Those expected back for Summer 2020 include The $100,000 Pyramid, Bachelor in Paradise, The Bachelorette, Card Sharks, Celebrity Family Feud, Holey Moley, Match Game, Press Your Luck, and To Tell the Truth. The fate of low-rated Family Food Fight is still up in the air. Season seven of Marvel’s Agents of SHIELD will be that show’s end and the network is expected to run it next summer as well.

What do you think? Did you enjoy the Reef Break TV show on ABC? Are you sorry to hear that it’s been cancelled? Would you have watched season two?

I am sorry that season 2 is not being made I love season 1 and can’t believe you left us with the cliff hanger so not fair.

Just watched final episode of reef break, really enjoyed the 13 episodes, could have left with a better ending not left you hanging

Could at least wrap up the storylines you left hanging ….

I really enjoyed Reef Break! I’m really disappointed that it was cancelled. If it didn’t hold up to some major game or reality shows, change the day and time it’s on and I believe it will rank higher. I wish they would bring it back!

I had been looking forward to a season 2 this summer. No wonder I VERY rarely watch shows on ABC. A fun show with sun, surf, Poppy and Desmond! Instead trash reality and game shows. I hope some other network or streaming picks it up instead.

I loved Reef Break and I am saddened to hear it is not returning.

I am so disappointed that both Grand Hotel and Reef Break have been cancelled; I enjoyed both of them; very sad to lose them both.

I feel it was a very good show, we do not need any more game shows, Please renew.

I really enjoyed Reef Break! I’m really disappointed that it was cancelled. If it didn’t hold up to some major game shows, change the day and time it’s on and I believe it will rank higher. I wish they would bring it back!

Please give the writers what they want and get the show back on the air… it was my fave!