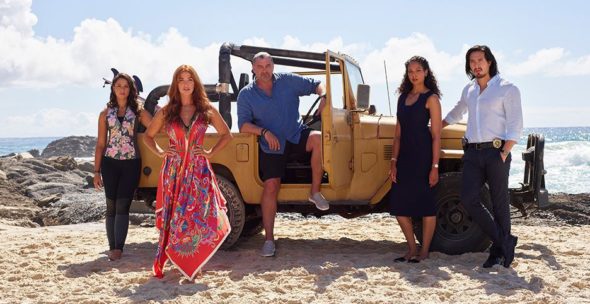 These days, Cat works as the fixer for the governor of a beautiful Pacific Island. Thanks to her checkered past, Cat has a deep understanding of criminals and the crimes they commit.

When Cat first returns home to “The Reef,” she finds herself at the center of a kidnapping. As a real risk-taker, she runs toward adventure, not from it.

Series Finale:
Episode #13 — Endgame
Cat Chambers is on the run and fearing for her life and freedom. Hearts are broken and futures are uncertain as Cat faces her toughest case yet – to clear her own name.
First aired: September 13, 2019.


What do you think? Do you like Reef Break TV series? Are you sorry that this ABC TV show has been cancelled instead of renewed for a second season?

WE loved the show reef break, and LOOKED FORWARD TO NEW EPISODES. please renew and don’t cancel it, please. all our good movies are getting cancelled and filled with a bunch of garbage. Please Reconsider.

Yes, I loved it!!! They keep some stupid comedies and every show has gays in it now. I don’t care what they do but I have no desire to watch them.

You’ve got to be kidding!! I was looking to see when it would air again & it’s been cancelled!! Those reality shows stink. Game Show Network has many shows that I can watch (although I am getting tired of Family Feud) Please reconsider.

Are you kidding it is a great show, and why do shows have a season finale, or a cliff hanger, and the network cancels it? It’s like reading a book and the last chapter is missing! Bring it back on! PLEASE

I really like to show. It’s a shame they took it off. They always take of the good ones

Yes. Disappointed it has been cancelled. Lovely to see a show filmed internationally. Cute script. Couple of twists…nice for chilling. Too bad…

I loved this show……..you cancel all the good ones. Sad!