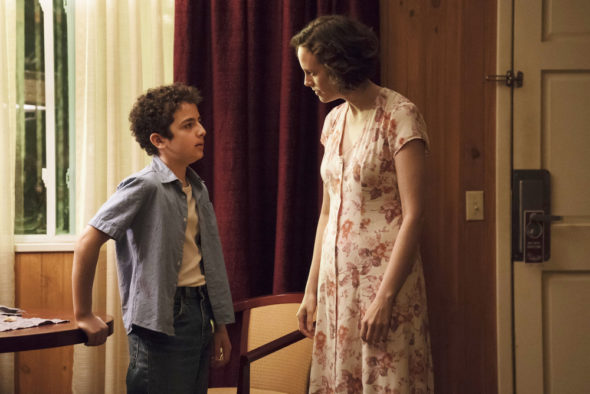 Is Detective Ambrose still on the case? Has The Sinner TV show been cancelled or renewed for a third season on USA Network? The television vulture is watching all the latest cancellation and renewal news, so this page is the place to track the status of The Sinner, season three. Bookmark it, or subscribe for the latest updates. Remember, the television vulture is watching your shows. Are you?

A USA Network crime drama anthology, season two of The Sinner stars Bill Pullman, Carrie Coon, Natalie Paul, Elisha Henig, and Hannah Gross. It follows Detective Harry Ambrose (Pullman), as he returns to his rural New York hometown, to work a case in which an 11-year-old boy (Henig), with no known motive, killed his parents.

The second season of The Sinner averaged a 0.28 rating in the 18-49 demographic and 1.10 million viewers. Compared to season one, that’s down by 46% and 39%, respectively. Check out how The Sinner stacks up against other USA Network TV shows.

Will USA Network cancel or renew The Sinner for season three? The ratings are way down but it’s still a good performer for the channel. At this point, I suspect The Sinner will be renewed but these declines are not good. I’ll update this page with breaking developments. Subscribe for free updates on The Sinner cancellation or renewal news.

3/6/19 update: USA Network has renewed The Sinner TV show for a third season.

What do you think? Are you glad that The Sinner TV show has been renewed for season three? How would you feel if USA Network had cancelled this TV series, instead?

I hope it is renewed. I really enjoyed it

Loved “Sinner” ! Give us a date please! Watched both seasons been looking since beginning of summer. Is this the finale?

The second season of Sinner started off so great! However, much like season one, it fizzled badly towards the middle and in the end. Amazing that both seasons also ended with a smarmy happy ending. What a major disappointment this show has been.

The Sinner is an excellent mystery/drama anthology that’s a “Why done it?” instead of a “Who done it?” You see the crime being committed up front and spend the rest of the season trying to discern the motive. I’ve enjoyed both seasons and look forward to seeing the third.

The Sinner is a REALLY good program! Hope it comes back!