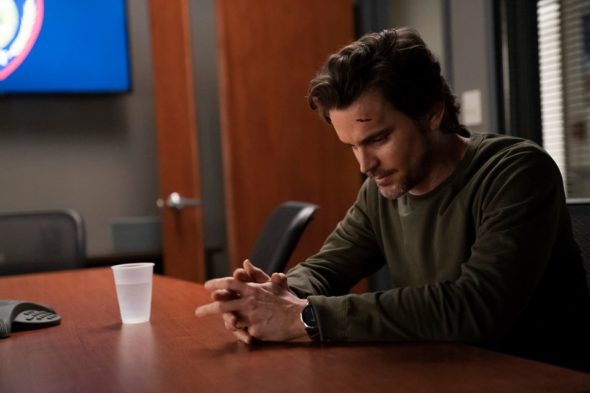 Will justice be served in the third season of The Sinner TV show on USA Network? As we all know, the Nielsen ratings typically play a big role in determining whether a TV show like The Sinner is cancelled or renewed for season four. Unfortunately, most of us do not live in Nielsen households. Because many viewers feel frustration when their viewing habits and opinions aren’t considered, we invite you to rate all of the third season episodes of The Sinner here. *Status update below.

A USA Network crime drama, The Sinner stars Bill Pullman, Matt Bomer, Chris Messina, Jessica Hecht, Parisa Fitz-Henley, and Eddie Martinez. The third season follows Detective Harry Ambrose (Pullman) as he begins a routine investigation of a tragic car accident on the outskirts of Dorchester in upstate New York. Jamie Burns (Bomer) is an expectant father who turns to Ambrose for his help. While investigating, Ambrose uncovers a hidden crime that pulls him into what turns out to be one of the most dangerous and disturbing cases of his career.

What do you think? Which season three episodes of The Sinner TV series do you rate as wonderful, terrible, or somewhere between? Do you think that The Sinner should be cancelled or renewed for a fourth season on USA Network? Don’t forget to vote, and share your thoughts, below.

*6/16/20 update: The Sinner has been renewed for a fourth season on USA Network.

Season 3 was a waste of time pure and simple. The plot was unnecessarily complicated and the character development was silly.

I thought Season 3 was horrible!! I fast forwarded Episode 8 to get to the ending to see Jamie die. Too much corny drama. What detective allows himself to be buried? What stupid woman doesn’t leave when told she’s in danger??? Over and out.

This was the best season of Sinner so far. What a surprise ending. Great acting!

I have enjoyed every season of The Sinner it is always riveting .I hope to continue enjoying every season and every episode for a long time to come! Do not cancel!