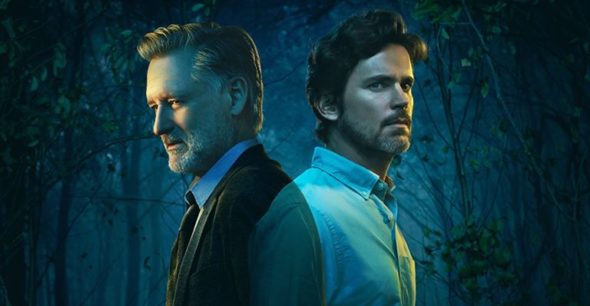 There was a big drop in the ratings in season two of The Sinner but the show remained one of the highest-rated shows on USA Network. Will the numbers rebound in season three? Will The Sinner be cancelled or renewed for season four? Stay tuned. *Status update below.

A mystery crime drama, The Sinner stars Bill Pullman, Matt Bomer, Chris Messina, Jessica Hecht, Parisa Fitz-Henley, and Eddie Martinez. The third season follows Detective Harry Ambrose (Pullman) as he begins a routine investigation of a tragic car accident on the outskirts of Dorchester in upstate New York. Jamie Burns (Bomer) is an expectant father who turns to Ambrose for his help. While investigating, Ambrose uncovers a hidden crime that pulls him into what turns out to be one of the most dangerous and disturbing cases of his career.

For comparisons: Season two of The Sinner on USA Network averaged a 0.28 rating in the 18-49 demographic and 1.10 million viewers.

What do you think? Do you like The Sinner TV series on USA Network? Should it be cancelled or renewed for a fourth season?

*6/16/20 update: The Sinner has been renewed for a fourth season on USA Network.

I adore this show!! Really hoping it gets renewed for a fifth season.

I loved the first two seasons of “The Sinner”: well written, and acted. However, season three was a horrid disappointment. Much of the content was obviously “lifted” from a superior UK series, “The Fall” by British writer, Allan Cubitt.American “Sinner” viewers who liked season three, but have not seen “The Fall” (now on Amazon Prime) should watch immediately. “The Sinner” was inspired by the same thesis as “The Fall” but the writing is utterly immature,repetitive and uninspiring.USA network: hire a competent writer, not one patently out of her depth with big, complex ideas such as Nietzsche and T.S. Eliot. The… Read more »

Bring on a season 4!

Season 1 was the best but I did enjoy season 2 also this new season is the so awful. I was ready to give up on the show but last weeks episode brought me back in then this week took me right out of it. I’m done watching it I don’t even care why he’s acting the way he is. What a waste of my time.

I find this season very frustrating and wish it was over already. The man is obviously very sick and Bill pullman’s character allowing him to bury him is just off the charts. He got the confession for god sakes. I can’t even imagine how it ends, but all I can think of is his poor wife. I usually like this kind of stuff, but it’s become mundane. I doubt that I will watch it if it gets renewed. The first season was incredible!!

Watched part 5 season 3 tonite on channel 242 USAHD Direct tv? The show so GOOD AWESOME INTERESTING TO SAY THE LEAST! But the commercials tnite compared to other episodes a bit much? Or was it just me ? I wanted to see more! It is interesting the control that Nick had over Jamie or did he ? They are both really the same. Just warped minds. Really two peas in a pod! Very wicked men! Out of control.

Chris Messina, Matt Bomer and Bill Pullman, we’re in for the Season. We loved Season 1 but somehow didn’t watch the second?!

I turned it off after watching half of season three episode one. As a defense attorney, it is Not logical any police department would investigate the death of a person after a horrendous accident such as they were involved in.He had no seatbelt on.They were traveling at 80 miles an hour and he went through the windshield. Case closed file your report and let’s go home.Because the series is based on what I think is ridiculous beginning I will not watch season three

I’m not sure if you noticed that it is a drama not real! So they kind of do it however to make it different & unusual to hold the interest of people that like this type shows like me! I Totally Love this show. It’s a couple of sickos that are evil The Detective picks up on that and doesnt go by the book because he cld see it from the 1st time he spoke with Jamie he cld just tell ! He was off ! He also knows frm experience that something really bad is about to happen again… Read more »