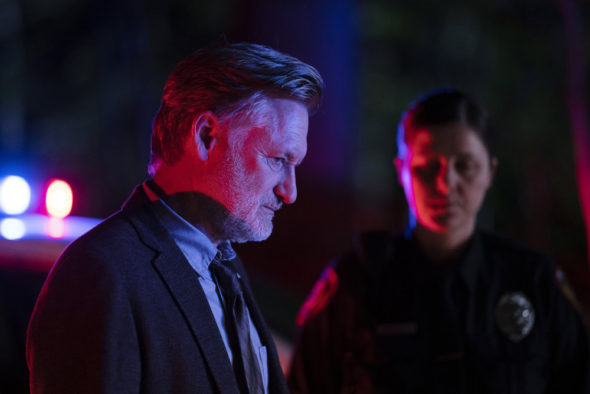 Can Ambrose solve this case? Has The Sinner TV show been cancelled or renewed for a fourth season on USA Network? The television vulture is watching all the latest cancellation and renewal news, so this page is the place to track the status of The Sinner, season four. Bookmark it, or subscribe for the latest updates. Remember, the television vulture is watching your shows. Are you?

Airing on the USA Network cable channel, The Sinner stars Bill Pullman, Matt Bomer, Chris Messina, Jessica Hecht, Parisa Fitz-Henley, and Eddie Martinez. The third season follows Detective Harry Ambrose (Pullman) as he begins a routine investigation of a tragic car accident on the outskirts of Dorchester in upstate New York. Jamie Burns (Bomer) is an expectant father who turns to Ambrose for his help. While investigating, Ambrose uncovers a hidden crime that pulls him into what turns out to be one of the most dangerous and disturbing cases of his career.

The third season of The Sinner averaged a 0.16 rating in the 18-49 demographic and 651,000 viewers. Compared to season two, that’s down by 44% in the demo and down by 41% in viewership. Find out how The Sinner stacks up against other USA Network TV shows.

Will USA Network cancel or renew The Sinner for season four? The ratings dropped quite a bit in season two but it remained one of USA’s highest-rated shows. The numbers are down once again in season three but USA Network has very few scripted shows left so, I’m thinking The Sinner will be renewed. I’ll update this page with breaking developments. Subscribe for free alerts on The Sinner cancellation or renewal news.

6/16/20 update: The Sinner has been renewed for a fourth season on USA Network.

What do you think? Are you glad that The Sinner TV show has been renewed for a fourth season? How would you feel if USA Network had cancelled this TV series, instead?

I really enjoy this show and hope there is another season. Bill Pullman is great in this show!

Season one was just outstanding! Season two was not bad… Season three was boring.

Season three was nowhere near as good as the first…didn’t like the way they portrayed Ambrose..Dumb story line…I would say..it done…over

Intriguing philosophical concept, but didn’t live up to the hype. The acting was good, but the content of the storyline dwindled in comparison.

This is a very well written and acted show. I love the lead detective. I am hooked.

This is a good show. The head detective is awesome. I wish it was easier to understand them when they all talk. There is a lot of mumbling, and I have to turn the volume way up.

Would LOVE to have a season 4 of Sinner. Awesome show!!!