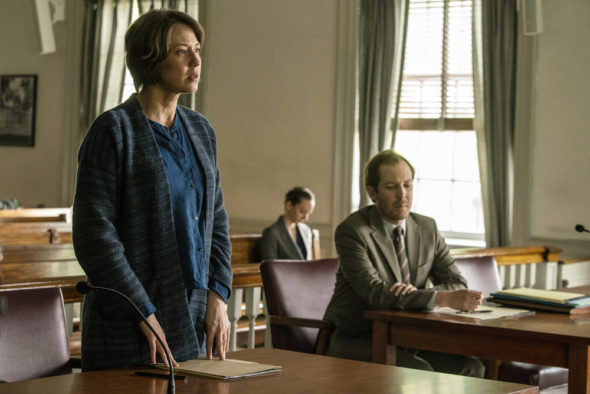 Is Detective Harry Ambrose on the right track during the second season of The Sinner TV show on USA Network? As we all know, the Nielsen ratings typically play a big role in determining whether a TV show like The Sinner is cancelled or renewed for season three. Unfortunately, most of us do not live in Nielsen households. Because many viewers feel frustration when their viewing habits and opinions aren’t considered, we’d like to offer you the chance to rate all of the season two episodes of The Sinner here. *Status update below.

A USA Network crime drama anthology, season two of The Sinner stars Bill Pullman, Carrie Coon, Natalie Paul, Elisha Henig, and Hannah Gross. It follows Detective Harry Ambrose (Pullman), as he returns to his rural New York hometown, to work a case in which an 11-year-old boy (Henig), with no known motive, killed his parents.

What do you think? Which season two episodes of The Sinner TV series do you rate as wonderful, terrible, or somewhere between? Should USA cancel or renew The Sinner for a third season? Don’t forget to vote, and share your thoughts, below.

*3/6/19 update: USA Network has renewed The Sinner TV show for a third season.

honestly I watched the 1st WHAT AN AWESOME SHOW. After season 1 Jessica Biel and Harry were great thought they couldnt top it, I was wrong with Julien (that kid can act!) his mother and his sister the cop all brought something and all had motives. Most shows you look for the who not the why and honestly I watched the 1st 5 min of season 1 until one night I left it on and ended up binge watching it. Hope season 3 is coming.. will we ever see Jessica Biel or Jullian again.

This show is amazing. I binged season 1 in one day. I couldn’t stop watching. Season 2 is just as good. I hope this show gets renewed

Great show! Very disappointed that the show is not in tonight..why would the network stop this show before the storyline ends.

I am enjoying watching the Sinner season 2. You never know what is going to happen next. Bill Pullman does a great job. I hope there will be a season 3

I love this show. It has many twists and turns and one of the best mystery shows on TV. Pleas bring it back for Season 3. There are so few shows with such good acting and story lines.

The first episode was spell binding and looks to be a winner for sure. Love this show. I hope it has many seasons to go.

Season one was a mystery,and really grear season two was just blinding and very unexpected but very interesting. Good mystery I really love this show and I hope we have many more seasons to go cause it is a winner.