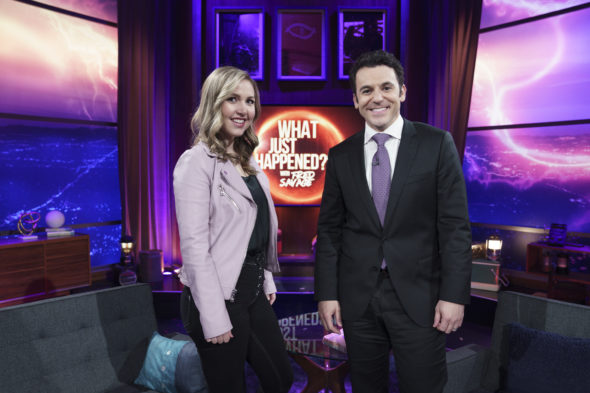 TV show description:
Airing on the FOX television network, What Just Happened??! with Fred Savage was created by Savage, Dave Jeser and Matt Silverstein. It is a fandom-filled aftershow that’s devoted to a fictional television drama series called The Flare.

The Flare TV show is based on fictional author TJ Whitford’s sci-fi book series, The Moon is the Sun at Night. The book revolves around a solar event and its effects on Earth — specifically, the small, blue-collar town of Milford, IL. As the story progresses, it becomes a post-apocalyptic battle for human survival. Jon Cassar directs the (fictional) drama series.

The book has supposedly been a favorite of Savage’s (playing a fictional version of himself) since childhood. A hybrid comedy and talk show, the parody series features multiple segments, including sit-down celebrity interviews, set visits to The Flare, interviews with The Flare cast and fans, and more.

Savage is aided by a co-host (Taylor Tomlinson) and the aftershow’s music is provided by Best Coast (Bethany Cosentino and Bobb Bruno), the in-house band. Carrie Havel serves as the fictional director on the talk show.

What do you think? Do you like the What Just Happened??! with Fred Savage TV show? Do you think it should be cancelled or renewed for another season?

I love this show! Really hope it gets renewed

I like the show, I think it’s funny! It’s refreshing to see a show that is just trying to be silly, instead of all the other crap on T.V. I literally laugh outloud every week. I also love that I can watch it with my kids.

Not a great show. I give it a try today. What I heard about it made it sound like an 64%. So I thought ok it could be save but it was just slightly worse in spots. I give it an 61%

If you don’t enjoy this show, chances are you are not the intended demographic. I’m a 29 y/o female who grew up seeing him constantly on tv. I appreciate the niche; from the deadpan humour to the fact they have BEST COAST as their house band, I get what they’re doing and I dig it.

Not at all impressed When Fred is in a show that’s the kiss of death!~

Fred was a child star…should have let his career die a natural death. This series is soooooo bad.