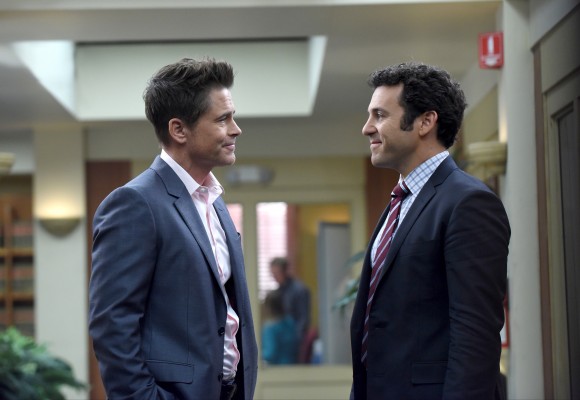 The new comedy series will follow Savage, who plays the host of a “mega-meta parody of a Talking Dead-esque aftershow — that will analyze the events in a fictional drama titled The Flare, a sci-fi series based on a fake book series titled The Moon is the Sun, of which Savage is a massive fan.” Kevin Zegers, Guillermo Diaz, Taylor Tomlison and Shiri Appleby also star.

On What Just Happened??!, Lowe will be playing a version of himself who appears on the aftershow “as a couch guest and celebrity fan.” The series is slated to debut on FOX on June 30th.

DID YOU HEAR WHAT JUST HAPPENED??!

Comedian Taylor Tomlinson to Co-Host Alongside Fred Savage and Best Coast to Join as House Band on FOX’s WHAT JUST HAPPENED??!

About WHAT JUST HAPPENED??! WITH FRED SAVAGE:

THE FLARE is a fictional television drama that now has a very real after-show, called WHAT JUST HAPPENED??! WITH FRED SAVAGE, dedicated to exploring the fandom surrounding THE FLARE.

THE FLARE is based on fictional author TJ Whitford’s sci-fi book series, “The Moon is the Sun at Night,” which has been a favorite of Fred Savage’s since childhood. The book revolves around a solar event and its effects on Earth – specifically, the small, blue-collar town of Milford, IL – and slowly unfolds into a post-apocalyptic battle for human survival.

After-show WHAT JUST HAPPENED??! WITH FRED SAVAGE, a half-hour fictional comedy/talk show hybrid, will feature multiple segments, including authentic sit-down celebrity interviews, set visits to THE FLARE and interviews with the “cast,” as well as discussions with fans and more.

WHAT JUST HAPPENED??! WITH FRED SAVAGE is produced by 20th Century Fox Television, Double Hemm and The Crest Lamp Company. It was created by Fred Savage, Dave Jeser and Matt Silverstein, who will serve as executive producers alongside David A. Hurwitz, Jen Patton and Adam Lowitt. Additional writers include Abbey McBride, Edgar Momplaisir, Chase Mitchell, Agathe Panaretos and Sean O’Connor. Jon Cassar serves as director on THE FLARE, and Carrie Havel serves as director on the talk show.”

What do you think? Are you a fan of The Grinder? Will you check out What Just Happened?

I really enjoyed The Grinder and was cancelled way too early.

This show won’t even finish the season. How did this pitch get bought?

I will definitely check it out! I’m a big fan of Fred Savage and Rob Lowe