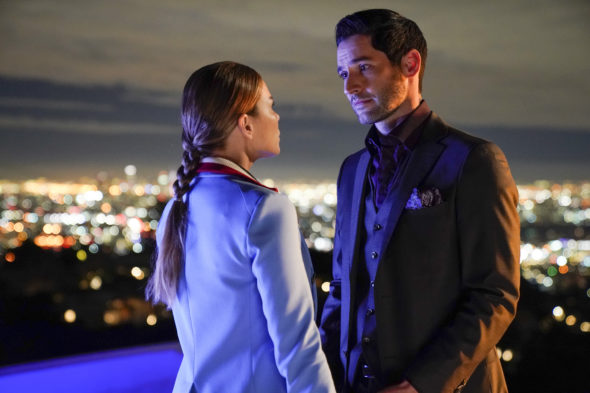 EPs Joe Henderson and Ildy Modrovich, co-showrunners of the cancelled Lucifer TV show on FOX, want to give the devil his due, and the fans are with them. The duo already has plans sketched out for Lucifer season four. They are teasing them out — but just enough so that they won’t spoil the audience, if some guardian angel steps in to save Lucifer for a fourth season.

DEADLINE: What did you have planned for season 4?

HENDERSON: As you saw in the finale, Chloe saw Lucifer’s devil face. Finally, proof that Lucifer really is who he said he was. No turning back. Chloe knows the truth.

So that was the big thrust of season 4 – exploring Chloe dealing with those ramifications, and how it affected her relationship with Lucifer. Both professionally and personally. Can you work with the Devil? Can you LOVE the devil?

MODROVICH: And we also had an exciting character from Lucifer’s past who was going to come in and mix everything up. A very personal, intimate figure who we won’t reveal the identity of yet… until we find out if we get the chance to tell the tale on a new network.

What do you think of Henderson and Modrovich’s plans for a fourth season of their Lucifer TV series? Would you tune in? Where do you hope Lucifer lands? Sound off, in the comments.

The wife and I are very disappointed about season four being cancelled on fox. We enjoyed this program a lot.

another thought! What would happen if everyone of us viewers stop watching fox tv!!!!!!

I was just turned on to Lucifer and I can’t get enough. I will follow where it goes.

I am so utterly thrilled that Lucifer has been picked up by the awesome NETFLIX. I’m ecstatic. It’s my favourite show and also of my two brothers who live with me. NETFLIX is the smart channel. They know a hit when they picked up Lucifer for Season 4. I still can’t believe it. ???? Bring back GRIMM for Season ??? 6. My other favourite show

So, Fox Entertainmrnt TV now displays the same idiotic decision-making as Fox News! Trying to tell us what to watch and what is good for us and are wrong on both accounts! Lucifer is a terrific show but it is TOO intelligent and well produced for the dolts at Fox – gee, maybe you can cast Karl Rove as Lucifer, Jr. Terrible decision!!