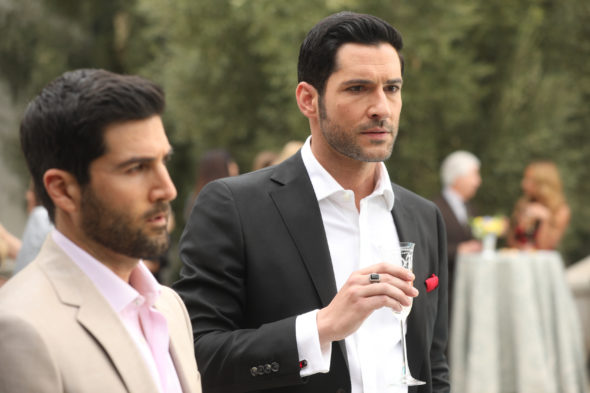 Is there still hope for Lucifer? Deadline reports The CW will not be picking up the cancelled FOX TV show for a fourth season.

Despite a very vocal fan cry for a fourth season, The The CW boss Mark Pedowitz has announced the network is not picking up Lucifer for another season:

We have not had conversations, there have been no discussions. We have been focused on own development, we are happy with what we have.”

What do you think? Are you a fan of Lucifer? Do you still want a fourth season?

Seriously your cancelling it ?? I’m from MALAYSIA and even i enjoy this series.. U dont just leave it hanging like that and expect people to be happy from it. Please bring justice to this show. #SaveLucifer #PickupLucifer

So many shows are treated the same way. They (the networks) claim that through ratings that a show should live or die. Nobody ever asked any of my friends or relatives if we watched Lucifer. And then to tease by showing lost episodes AFTER the season three finale…..come on FOX. Your station, has just lost viewership….oh wait….maybe that is why they do not ask me.

Why??? My whole family is truly saddened by this. We are all considering dropping Fox because of this. Why watch a station that has shows that hooks you and then BAM! WAMO! It’s gone for good. No end…. no conclusion…. Over. Why do we want to go through this again. We lose enough in life. Now we lose our favorite excape from the trials of life? Again I ask…… WHY?

Too bad the television broadcaster don’t give a hoot about us the viewers. After all we are only the fans. The little people who cannot save our favorite tv serie. Very sad Fox. Lucifer was actually refreshing and most of all VERY DIFFERENT then eveything else in a great way I may add. I certainly do not believe for a moment that the ratings were not high enough. This is for me the easy way out. #savelucifer. I wish but somehow think as I mentionned before Fox do care!!! Period.

Bring the show back! My husband and I look forward to each episode!

I want more Lucifer, it simply can’t end like this

My husband and I love the show! We need a fourth season. Please don’t cancel. It’s a great show and we always look forward to the next episode.

Bring it back!!
It did take awhile for the show to get going, but Season 3 finally had the characters come into their own and the story line was very interesting.
Like a good novel that is hard to put down, this show had me coming back to see what was going to happen next.

Who are these people who decide? And to think an idiotic show like Big Bang is still on the air! Who are you catering to? Big mistake! One of the most original shows in a long time!

this show was my all time favourite….but when they killed off charlotte and dectective decker got to see lucifer’s face i realized it was over…if there is any chance of another station picking up the show that would be great….but at least if it;s to end…end it with a bang….i will miss this show…

Full on spoilers, girl. At least prepare a reader for the spoiler you dished out. Its 2018, we’ve been over this subject all over social media. Spoilers are not ACCEPTABLE. There are so many ppl who want to save this show, including ppl who may be behind… Announcing a major spoiler like that could wake others interest. Stop being a part of the problem and be a part of the solution… At least use what we call ‘common sense’ and mark your revealing comment with a *Spoiler Alert* – Easy as that.

At least give the fans one more season to resolve the plot! Surely there is a network out there that can save this wonderfully original series.

This is such a great show with drama and comedy! Everyone I know that watches this LOVES it! BRING IT BACK!!!!!