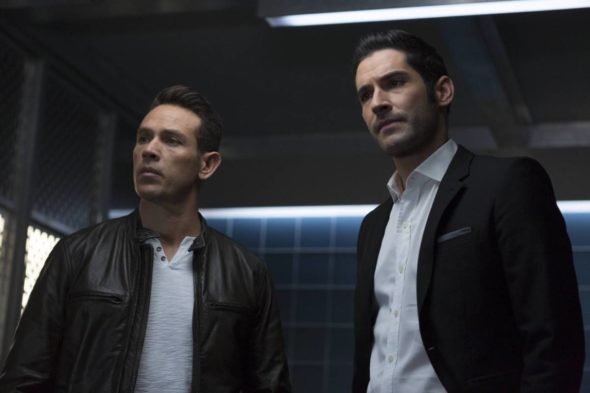 Is there still a chance for Lucifer? Recently, star Kevin Alejandro told CinemaBlend what he’d like to see if the cancelled FOX TV show is saved.

As of reporting, Lucifer has yet to be picked up by another network for a fourth season. However, if it is, Alejandro told CinemaBlend he wants to see Chloe’s reaction to discovering Lucifer’s true identity:

I would like to see the arc of how Chloe reacts and deals with knowing that he is genuinely the Devil. And I would like it to end in a way that the audience… I don’t want it to end in a happy way. I want it to be sort of destroying, in a way. But that’s just me, the dark side of me. They’re my favorite storyline. I love those guys, I think they’re awesome together.”

What do you think? Are you a fan of Lucifer? What’s the one thing you want to see if the show is picked up?

I’m so happy Netflix has picked up the show. It’s such a creative idea, good actors, good writing. I’d like to see a happy ending when it finally ends; maybe the Devil could get another chance as a human; a new devil take over in hell — CEO’s change all the time 😉

I was really very upset to find that Lucifer had been canceled. I watched every episode. I felt torn between my feelings about the main character, Lucifer. He was well played by Tom Ellis. He was able to portray the most evil of creation and endow him with a glimmer of not all bad. I felt that the show was widely watched and had a lot of people tuning in.

I’m devastated! This is the only show I watch on FOX, the only reason I would watch FOX. I love all these characters! The writing was clever and witty. I can’t name one thing I want to see, I just want to see Lucifer! Please bring it back!

I would like Lucifer to be more on the dark side really showing his presence/dominance and why no one messes with him.

please abc pick up Lucifer my friends in Windsor Ontario Canada and especially Detroit Michigan would watch you a lot more if you please pick up season 4 of Lucifer please please please I especially love this show. give us somethings to look forward to in the fall.